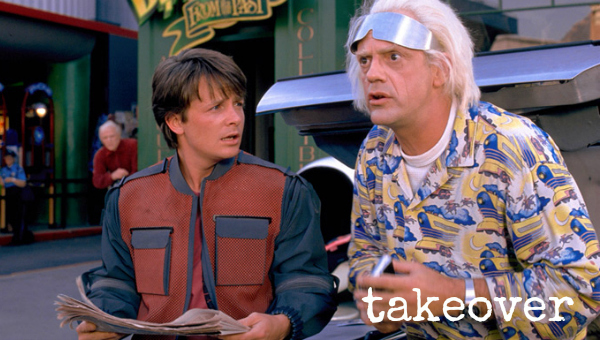 Corporate takeovers can be brutal affairs: jobs lost, salaries slashed, individuals devalued in the ruthlessly competitive world of the newly formed conglomerate. However, if you don’t like the new situation you find yourself in, you can always quit and move on to something else. But what if it wasn’t just your workplace that was subject to a corporate takeover – what if it was your entire past? You can’t just take up and leave if some pesky bully from the future has travelled back in time to alter the course of history and turned your present into a hellish tribute to his own megalomania.

This idea is the driving force behind BACK TO THE FUTURE PART II, the highly convoluted, but no less enjoyable sequel to the 1985 original. After travelling to the future, Marty McFly (Michael J Fox) and Doc Brown (Christopher Lloyd), accidentally allow Biff Tannen (Thomas F. Wilson) to send a sporting almanac from 2015 to his younger self in 1955. The 1955 Biff then uses the sports results from the almanac from the future to gamble his way to fortune and fame, and eventually becomes powerful enough to completely tak eover the town of Hill Valley in 1985, changing the present for Marty and Doc. Confused? Good.

It’s basically a film that asks, “What if the bully from high school became one of the most influential citizens in the USA?”

In this alternate reality 1985, Biff has turned Hill Valley from an idyllic slice of middle America into his own corporate city, full of casinos, bikers gangs, and his own smirking face plastered on every wall and TV screen. It’s what Nineteen Eighty-Four would have been like if it had been set in Vegas. He purposefully makes sure criminal gangs run the streets and terrorise the town’s citizens, as a cover up for his own shady dealings and illegal activity.
Worst of all for Marty, not only has Biff taken over his hometown, he has also muscled his way into his family, killing his father George (Jeffrey Weissman) and marrying his mother Lorraine (Lea Thompson). Now Lorraine, who was clearly forced into this arrangement, lives in constant fear of Biff’s tyranny, as he is above the law and can seemingly kill with impunity. It’s basically a film that asks, “What if the bully from high school became one of the most influential citizens in the USA?” Unsurprisingly, the results aren’t that pleasant for anyone involved.

So how do you solve the problem of a hostile takeover of your entire past? Well, as one would expect from this franchise, it involves time travel. The final act of the film is a slightly lumbered retracing of the original film’s finale as Marty tries to prevent Biff from giving Biff the almanac in the past so as to change the future, which is actually his present (although as the film is set in 1985 so, when watched these days, he’s technically saving the past). Confused again? Excellent.

So if the company you are working for is the subject to a corporate merger and you find your job satisfaction levels greatly reduced, remember that it could be worse; a dick from the future could have altered the past and turned your entire universe into a horrible dystopia. Things not looking too bad now, eh?