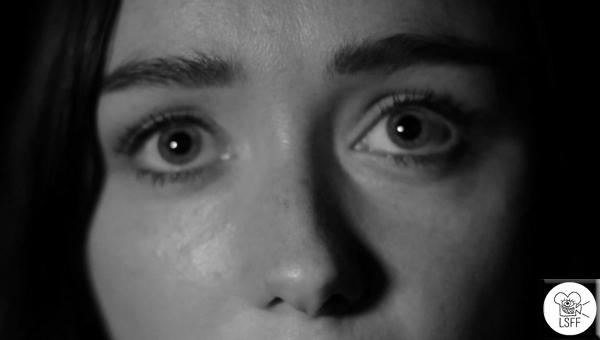 Running between the 4th and the 13th of January, the London Short Film Festival is a city-wide celebration of emerging film makers, experimental pieces and everything else cinema has to offer. Now in its tenth year, the festival is showcasing 300 films in 25 programmes over 24 venues around London,  including the Institute of Contemporary Art, BFI Southbank, and BAFTA in Piccadilly. Many of the entries are submitted in the festivals very own award’s with categories including Best New Short, Best Student Short, Best Short Documentary, Best Comedy Short and Best Low Budget Short.

One of the entries in the British Council Award for Best UK Short category is Mathy Tremewan and Fran Broadhurst’s THE LIGHTS AND THEN THE NOISE, shown as part of the TEENAGE GIRLS GO WILD program. We caught up with the filmmakers after the screening to talk about guerrilla filmmaking, the power of music and their alien abduction inspiration.

Liam Jack: What was it like, watching your own film with an audience?

Mathy Tremewan: It’s weird. I think we’ve seen this one more than any other film that we’ve done. This is only the second time we’ve seen it with an audience – the experience is different depending on who you see it with. I think both times it’s been a fairly full audience, and that feels different from watching it alone. Suddenly you’ve got people around you, and you feel their expectations.

We put posters up somewhere to say filming was taking place, but we had no control over it. Whatever happened we had to deal with…

Fran Broadhurst: It’s harder in a programme like that as well, with a bunch of longer shorts and then a very short short [at 5 minutes, TLATTN was the shortest film in the programme]. But in many ways that’s a really nice thing, and you feel people appreciate it as a little break in the middle of the longer film. You’re never quite sure what people’s expectations are going to be when you present them with a slightly strange film. The audience might be thinking in their heads, “Is thing going to be 25 minutes long like the others?”

MT: Yeah, scrambling around for the programme, like, “What’s the running time on this one? Is this a 25 minute one? How long have we got?” So the last time we screened this film at the Encounters Film Festival it was very different, as it was with lots of short shorts and that was a completely different experience to watch it in.

FB: It was shot in the early summer of 2011. We had no funding for it so it cost us only about £300 altogether. It all came about in part because there was this music festival, The Spaghetti Tree Festival in Peckham, happening one weekend.

MT: It came together very quickly.

MT: There was no deadline on it. No one was asking, “When’s the film going to be ready?” There was no one with any funding or investment attached. We had a very set idea of people we wanted to work with, and because we didn’t have deadlines we just worked when people were available. So it took a long time to finally get it finished.

It all came about from a B-Movie sci-fi aesthetic. And we wanted to emulate that.

LJ: How long did the production last?

MT: Three days in total. We did two days of shooting at the festival. We went down for the first day and we shot crowds and we tried to get used to shooting in that environment. And the second day we shot with the actress, Emily Taaffle, on the day “No Age” played. It was a bizarre experience because we structured it like a traditional shoot but in a very real environment. The crowd didn’t really know what was happening. I think they were loosely aware. We put posters up somewhere to say some filming was taking place, but we had no control over it. Whatever happened we had to deal with.

There was an aspect of it that was quite unknown and we were harnessing a lot of the energy of that gig. There is a sense that it was very true to that environment and the particular things that happened on that day. We wouldn’t have got that if we had shot at any other time.

LJ: Did you know the band beforehand?

FB: We were really big fans, and we knew them enough to be able to make an approach, which turned out well because they were behind the project and were really supportive. And because we were in the crowd shooting with an SLR we blended in. It was a guerrilla way of doing it. The whole shoot was very guerrilla and very minimal. We had to rely on the lighting that was already there for the gig and everything was just adapted to that space, to the dirty warehouse where it was shot. But it worked in our favour as it helps the aesthetic – the grainy look and feel.

There is a lot to be said for just doing it. If you’ve got an idea then just run with it as much as you can.

LJ: What were your influences?

FB: It all came about from a B-Movie sci-fi aesthetic. And we wanted to emulate that.

MT: There’s a Robert Adams book of photography [American photographer who documented the changing look of the American West in the 60s, 70s and 80s] so we incorporated that style. It was a cross between his very still, beautiful landscape images and this sci-fi stuff. Adams’ work had a real science fiction feel and we were just trying to work out a way of doing something like that. To work with light in a way that felt quite alien and strange.

FB: We’d been to see an exhibition by the artist Susan Hiller called “Witness”, where she had interviewed a lot of people who had experienced alien abductions. And the whole exhibition was based around these pods where you listen to people recall their encounter and experiences with alien abduction. So that was the original idea, of transferring that idea of people retelling their experiences and then applying it to gigs and live music. And their first experience of being in that environment and having that out of body experience. That was the starting point of the script.

LJ: What are you working on for the future?

FB: We’ve got a few features on in development. This year’s aim is to really get going on feature films. So we want to dedicate as much time as we can to writing those.

MT: I think it’s just a process of keeping working and keeping going. And doing projects that we’re really excited by.

LJ: What advice do you have for people that want to get into filmmaking?

FB: There is a lot to be said for just doing it. If you’ve got an idea then just run with it as much as you can. And you can always revisit ideas.

MT: I think it’s good to not bank everything on one idea that you want to make, if that idea is going to cost a lot of money. I think you can get yourself into a mess if you try and make one big masterpiece too early.

FB: Have a lot of projects on the go at once. Make sure you’ve always got several things going so if the opportunity to make one does present itself, then you can go ahead with it.

Mathy and Fran studied Film at Southampton and have been making short films and music videos for the past few years. They have made music videos for The Bloody Beatroots, Diagrams and have collaborated with Kate Tempest on her production “Wasted”. Their work has been featured on Dazed Digital, Portable, NME.com, Rolling Stone, Kerrang and MTV.
http://mathyandfran.com

One thought on “The Lights And Then The Noise”