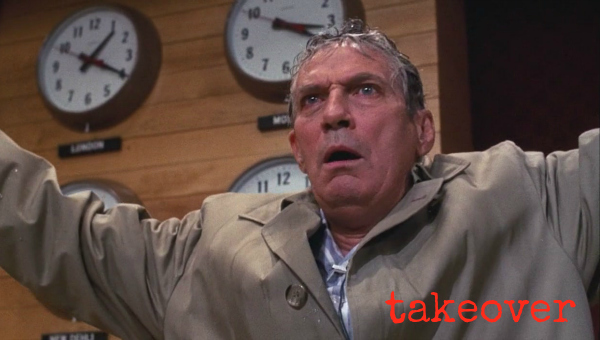 A darkened room lit by soft lights and green shaded desk lamps. One crumpled figure, the self-imploding news anchor Howard Beale, sits expectantly in a chair at the far end of a grand dining table. At the other, closing the thick, velvet curtains, is Arthur Jensen, the network chairman played by Ned Beatty. Jensen turns to face the confused and startled Beale, ”You are an old man, who thinks in terms of nations and peoples. There are no nations. There are no peoples…there is only one holistic system of systems… there is no America, there is no democracy. There is only IBM and ITT and AT&T and Du Pont, Dow, Union Carbide and Exxon. Those are the nations of the world today.”

Written by Paddy Chayefsky and directed by Sidney Lumet in 1976, the film NETWORK, with its commentary of a soulless world built on corporations, a world where celebrity is king and where news is not news but entertainment, is still resonant today. Peter Finch plays Howard Beale, once the cornerstone of his television station. With ratings lagging, he is given his marching orders, and whilst working his notice he causes havoc by announcing that at the end of the two weeks he will kill himself on air. In between the violent verbal outbursts, the unstable Beale is portrayed with a quiet tenderness by Peter Finch, helped by Chayefsky’s poetic and powerful script.

The company names and clothing may be dated but […] today this film reads like prophecy.

NETWORK is a biting satire containing rhythmic monologues with all the passion of an evangelical preacher, but with far greater intellectual depth. As well as the extreme genius of Finch and Beatty, the cast includes a whole host of dynamic and memorable performances – Robert Duvall, Faye Dunaway, and Hollywood darling of the 1950s, William Holden. Holden re-invigorated a flagging career with his oscar-nominated role as Max Schumacher, Howard Beale’s colleague and best friend.The company names and clothing may be dated but as Roger Ebert said, watched today this film reads like prophecy. It is a shocking state of affairs how little recognition that this four Oscar winning (ten Oscar nominations in total) film receives and it’s time to get angry about it. It is time to get out of your chair, to go to your window and shout “I’m as mad as hell, and I’m not going to take this any more!!”… and then watch this magnificent film on DVD.