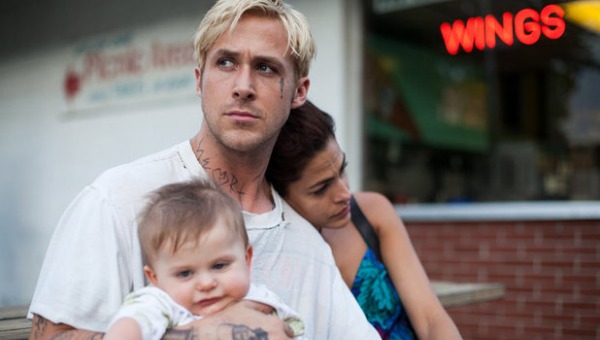 If you ride like lightning, you’ll crash like thunder.” This is the advice given to “Handsome” Luke (Ryan Gosling), a stunt rider turned bank robber, at the start of Derek Cianfrance’s THE PLACE BEYOND THE PINES. For the first exhilarating hour it seems the film is going to take this maxim to heart. However, after an added hour and forty minutes, THE PLACE BEYOND THE PINES is left resembling an endless, dull drizzle rather than an exciting thunderstorm.

Cianfrance’s film, a follow up to his fantastic BLUE VALENTINE, is an overly ambitious, sprawling drama that takes place over two decades. Luke’s foray into bank robbery is due to an encounter with old flame Romina (Eva Mendes), with whom he had unknowingly fathered a child. Wanting to provide them with money and security, the irascible rider turns to a life of amateur larceny which eventually brings him into contact with police officer Avery Cross (Bradley Cooper). Just when you expect the film to settle into familiar “cops and robbers” territory, it veers off in a completely different – but not necessarily satisfying – direction that attempts to cover everything from corruption, guilt, redemption, love, and betrayal, to heritage, politics, teenage rebellion, and the inescapable sins of our past.

Though the performances are commendable, the sheer abundance of narrative really lets the film down.

Whilst the film is admirable in its willingness to challenge narrative expectations, the resulting structure doesn’t quite work. The initial set up is engrossing, with Gosling in a well-suited, if somewhat unchallenging role. Luke, whose primary hobbies appear to be riding motorbikes and smoking cigarettes, is mysterious, insular, impulsive, and erratic. Heavily tattooed and dressed in torn, sleeveless t-shirts, he resembles a less professional version of Gosling’s character from DRIVE.

Gosling is supported well by Mendes who, after years of producing Hollywood fluff, is finally developing into an interesting actress and picking roles with considerable weight. If the film has a central point that all its interwoven stories come back to, then it is Romina. It is she who has to cope with Luke’s unpredictable and occasionally violent behaviour, a gang of corrupt police officers (led by a sneeringly nasty Ray Liotta), and later, her own teenage son as he runs the risk of following in his father’s troubled footsteps. Mendes brings sympathetic engagement to a film that is often rambling and aloof. Cooper’s performance as a policeman struggling with corruption in his own force is the most cerebral of the three leads, but also the least emotionally engaging.

Just when you expect the film to settle into familiar “cops and robbers” territory, it veers off in a completely different – but not necessarily satisfying – direction

Though the performances are commendable, the sheer abundance of narrative really lets the film down. There is a feeling that it is actually three separate films shoehorned into one. An extended coda, taking place 15 years after the bulk of the film, is dragged out to untenable lengths, enervating any dramatic strength that had been previously built. Somewhere in the expanse of narrative there is the heart of a solid story, and if Cianfrance had been more ruthless and clinical, he could have made a leaner and more absorbing film.

One thought on “The Place Beyond The Pines”