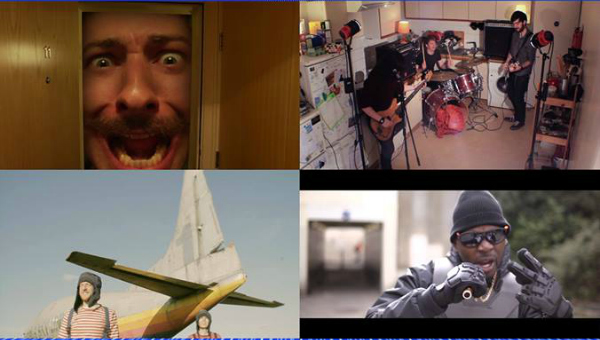 From the French New Wave and their contributions to Cahiers du Cinema to the video store clerk generation of Quentin Tarantino and Kevin Smith, working in almost any aspect of the film industry can be both a precursor to and an inspiration for moving into film production. The film making collective Project Trident have taken their talent from before and behind the scenes of the Arts Picturehouse and applied it to varied careers in film; and each year at the Cambridge Film Festival, they put on a showcase known as TRIDENTFEST.

This year’s collection of films was as diverse as ever, opening with a video supercut of some old vampire movies called, well, VAMPIRES; and accompanied by live rapping in the cinema from Carl Peck and Simon Panrucker, two members of the collective. With the tone for the evening pretty much set, anyone in any doubt about what was in store should have had their minds blown by the first of this year’s films from The Fabulous Poo Brothers (also known as Simon Panrucker and Andrzej Sosnowski). THE RULES was a short, sharp satire on the arbitrary guidelines often given to film characters, in this case delivered by a man in a safari suit covered in flashing lights. Poo Brothers films punctuated the evening, and it was nice to see their virtual stream of consciousness film making resolutely intact.

This year, the collective also entered the annual Sci-Fi London 48 hour film challenge and HERE COMES THE LIGHT was the result. The rules of the competition require each entrant to include a particular object and phrase in their film, and LIGHT (linked below) follows two friends and their quest for the objects which will set them free. As the entry is only five minutes, the audience may blink and miss some of the finer aspects of the film’s production, but thankfully the team also showed their ten minute making-of filmed by member Ryd Cook. This (by their own admission hugely self-indulgent) making-of demonstrated not only the level of attention to detail and craftsmanship that the dozen-plus Trident members put into this and every one of their films, but also the manic energy and passion they channel into their work.

After a break for the most literal stand-up comedy ever seen – two people attempting to stand each other up, badly – Simon Panrucker’s deranged FRUIT LADY was a lairy, twisted fairy tale and a comment on the morality of eating other people’s fruit. It was followed by a music video showing the time lapse development of a new studio in Bristol featuring a green screen room, and a film called BRIAN which displayed the potential of the new facility to supplement the team’s videos with nightmarish effects, not least the sight of Andrzej’s head, blown up to six feet high, attempting to eat a distraught Simon.

While many members of the collective continue to use their talents to amuse with broader, more puerile humour, Ryd Cook has been carving out a niche as a more mature, restrained film maker. He followed up last year’s THROWN with a tiny gem, BUCCANEARLY. Coupling his own live action shoot, based on a real childhood memory, with stop-motion animation from Jack Lowson, BUCCANEARLY is another example of clear and concise storytelling married to thoughtful direction; and Cook is starting to build an impressive portfolio of work.

Two more music videos followed. The first was pure energy, simply filmed with a cardboard Pac-Man ghost in a kitchen and the band playing their hearts out, but the video for Hot Head Show’s CHOPSTICKABEAN superbly complemented the band’s dark, up tempo music – described as a mixture of Captain Beefheart and Nick Cave, among others – with cutting edge effects, bizarre zebra women and life-sized carrots.

…another eclectic and entertaining evening from the Project Trident group.

The material from the collective has increased in length over the years, culminating initially in a thirty minute short called THE PURPLE FIEND shown at TRIDENTFEST 2011. Now Carl’s ambitions are stretching to a feature film, and he shared some initial storyboards and the outline plan to make the trailer. This in turn is intended to launch a crowd funding initiative, and although the budget needed is miniscule by the standards of most features, it will still require a monumental effort to bring it together.

If anyone is capable of pulling it off, then it’s likely to be Trident, and Carl demonstrated his own particular set of skills with the final video of the evening: a music video which casts up and coming hip hop artist Xidus Pain in the role of a superspy with a hoverboard, who is attempting to save the world. Taking cheap practical props and making them fantastical, and helping to highlight Xidus’ music to the best effect, it’s another excellent calling card for Carl’s technical skills; and rounded off another eclectic and entertaining evening from the Project Trident group. TRIDENTFEST continues to demonstrate the collective’s evolution as talented film makers with a wide set of skills, and this home grown event has retained its status as one of the most accessible events of the Cambridge Film Festival.