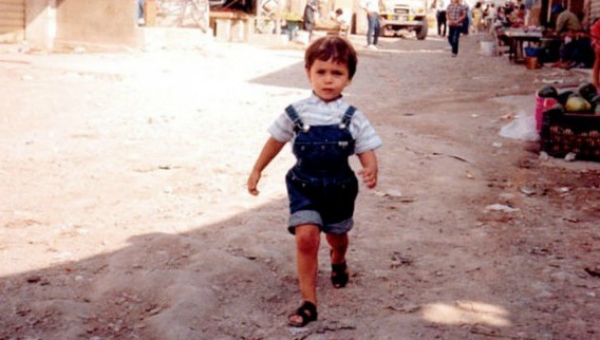 With the images of Syrian settlement camps and throngs of displaced refugees so fresh in our collective consciousness, one might expect Mahadi Fiefel’s A WORLD NOT OURS to create a buzz on the final day of this year’s Cambridge Film Festival. What could be more pertinent, and indeed more necessary in such uncertain times, than a film about displacement and the right to identity in the Middle East? With Leila Sansour’s screening of OPERATION BETHLEHEM having created such a tangible sense of emotion amongst her audience on day three of the festival, many would be eager to find out more about the wider Palestinian diaspora; a world so far removed from their own. But whilst Sansour’s portrait of Bethlehem is centered on its meticulous and unwavering coverage of a political campaign, Fiefel’s approach is altogether more subtle, and indeed gentle.

From the opening wide shot, where Fielfel falteringly zooms in on Ein-el-Hilweh under instructions from his father (who remains just out of shot), the film establishes itself as a deeply personal portrait; captured almost by accident amongst a wider political polemic. Filmed over many years, A WORLD NOT OURS was, by Fielfel’s own admission, never intended to be a motion picture. The story of Ein-el-Hilweh, one of Lebanon’s largest Palestinian refugee camps, is secondary to that of the colourful portrait of Fielfel’s extended family, whose home videos and family photographs take centre stage. Fiefel’s fascination with Ein-el-Hilweh and its inhabitants was not born out of any sense of political affiliation, but of a childish love of its “Disneyland” quality; of the possibility for adventure it offered him whenever he left the safety of Denmark to visit his Palestinian family during the holidays.

Like Fielfel we are never made to feel as if we truly belong.

This dream-like quality is one that is consciously allowed to pervade the fabric of the film. As such, the lucid and often very powerful testimonies of the camp’s residents appear alongside extracts from grainy archive footage, close-ups of swarms of swallows swooping through evening skies, and extended tracking shots of scooters weaving their way through tiny dark alleys. The world of Ein-el-Hilweh is one which Fielfel makes inherently difficult to capture.

The absence of a tangible chronological structure makes our interaction with the film feel both deeply personal and strangely distant. Like Fielfel, we are never made to feel as if we truly belong. Our experience of the camp’s streets, of its inhabitants and rituals may be dream-like, but is a dream from which we know we will wake. Our visit into the sealed off world of Ein-el-Hilweh is characterised by a pre-existing knowledge that we, unlike the thousands of ‘temporary’ settlers, are not condemned to spend a lifetime in “an open air prison”. It is therefore only fitting that A WORLD NOT OURS did not create the frenzy initially expected. Although moving, poignant, at times beautiful, this is not a film which actively seeks to inspire emotion. Ein-el-Hilweh is a world that is neither Fielfel’s to sell nor ours to claim.