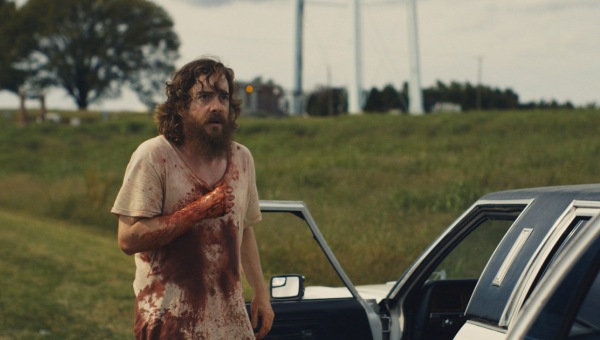 BLUE RUIN is a stripped-down conveyor belt of tense and twitchy action, and announces the arrival of a first-time director with plenty of promise. Jeremy Saulnier’s low budget revenge drama may not have much in the way of plot or characterisation, but it is a superior specimen of the ‘lean and mean’ school of thought: aiming to keep the audience on the edge of their seats with a minimum of fuss or pretension, and with an ever-present threat of violence hanging in the air.

A strongly sympathetic lead performance from Macon Blair as a man both created and destroyed by an ongoing cycle of violence goes a long way to keeping things interesting. Dwight (Blair) first appears in a bath when he is disturbed by an apparent intruder. It turns out that in fact he is the intruder, a vagrant making hasty use of an empty home. Dwight, soft-spoken and bushy of beard, actually lives in a rusty old Pontiac; a blue ruin riddled with bullet holes. His life is turned upside down when he is informed by a local police officer that the man who killed both his parents is about to be released.

He immediately spins into action by getting the car back on the road and trying to get hold of a gun. Has he been biding his time since the tragedy, waiting to exact revenge, or did the news simply reawaken a dormant thirst for life? Saulnier leaves us guessing. He then turns to his sister (Amy Hargreaves) for solace, but inadvertently puts her life in danger, whereupon the film becomes a sort of poverty row version of the Bourne series (minus the glamorous locales, political intrigue and pounding soundtrack), as he improvises his way through a variety of defensive and offensive measures.

has faintly Shakespearean connotations, with Dwight as a sort of hobo Hamlet (with a shotgun)

Dwight wants to end the cycle of violence once and for all. His blank, slightly pitiful expression leaves it unclear whether he’s aware that he himself is perpetuating that cycle by exacting revenge. Writer-director Saulnier dips a toe in these murky moral waters, never revelling in the ensuing violence as some revenge thrillers like to do. The tit-for-tat war between two families with a mentally uncertain protagonist has faintly Shakespearean connotations, being played out in small town USA with Dwight as a sort of hobo Hamlet (with a shotgun).

Characterisation is deliberately sketchy; BLUE RUIN focuses solely on suspense, and delivers plenty of that. The initial act of revenge in a roadside restaurant toilet, two home invasion sequences and a precarious moment with a man in a car boot are the undoubted highlights. A deeper exploration of Dwight’s fragile nature might have resulted in a more intriguing film; as it is, the only light shed on his past is a convenient encounter with childhood friend-turned-gun expert Ben (Devin Ratray). But that would have taken away from the lean and mean nature of the piece. Either way, Saulnier’s next project will be one to watch.