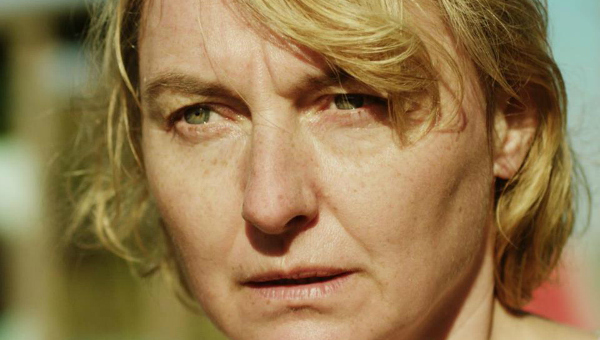 When David arrives home from the front line, a sense of military duty drives him to visit Karin’s house; but in doing so he dredges up old ghosts.

From the start of COWBOYS AND INDIANS, a title loaded with a melancholy sense of memory, the heartbreak is palpable. It is obvious that David’s sense of anxiety is not simply due to his return to the world: he has something he needs to confront, a moment that has been haunting him for a long time. He lost his childhood friend Phillip at the front and now he’s come home to see their mother.

Beata Lehman gives a powerful portrayal of despair as grieving mother Karin. Before David knocks on her door, she sits listening to her son’s music on full blast, anything to bring back his memory. She gives the impression of someone who has truly retreated into the hollow sanctuary of her family home. She is fearful and flighty, wary of the real world to the extent that a quick reading of her son’s journal transports her back to Phillip’s childhood. She follows him and young David to the park where she watches them play Cowboys and Indians: it is a moment that begins with nostalgia, as the sun bleeds absent life into the film and Karin looks on in joy. The moment is soon crushed, though, and she dragged violently back to reality. It is the strongest moment in COWBOYS AND INDIANS, showing the transcendental, hallucinogenic power of true grief.

Thomas Forster’s camerawork creates an effortless sense of place and cold separation, making its two primary subjects feel miles apart while in the same room. Frequently deeply intimate without ever feeling intrusive, it catches every flicker of despair on Karin’s face.
Jan-Gerrit Seyler’s short is a powerful vision of solace and mourning in its most lonely form. There is a strong sense of isolation throughout. The script gives David little to say: one feels his driving emotion is more guilt than grief, a greater sense of responsibility for the loss of his friend; while Karin is full of questions, desperate to understand, to try and justify this terrible loss to herself.