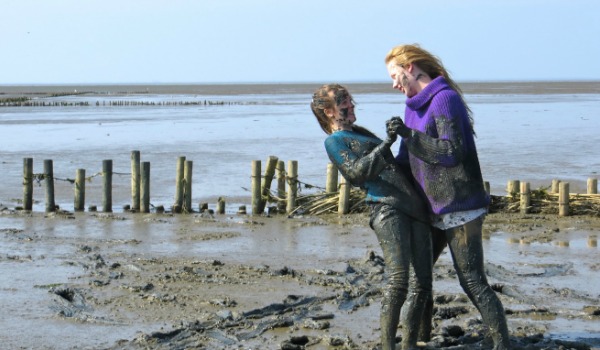 A teenage girl finds solace and glimpses of a new way of life while working with horses, in Monika Treut’s uplifting, occasionally over-determined film.

There is a moment near the beginning of Monika Treut’s film, OF GIRLS AND HORSES (Von Mädchen und Pferden), when a character is listening to a political radio broadcast. The announcer states that the Chancellor of Germany, Angela Merkel, is following the Thatcherite dictum of ‘There is no alternative’ in politics. This spells out the film’s gentle message – that there are ways of living that aren’t the social norm, whether this is living remotely from the city, or in terms of alternative sexuality.

As the title suggests, the film is a meditation on girls (growing comfortable in their own skin; falling in love) and horses (symbolising the healing power of nature). The central character is Alex (Ceci Chuh), a teenager who has been sent by her adoptive mother to a remote farm to work as a summer intern. From the first shot of Alex – incongruously at a roadside bus-stop, resolutely plugged into music – we sense the social and personal isolation she has cast herself into.

Many of the ‘troubled teen’ motifs are present and correct. Alex has self-harmed, doesn’t know her father and has a sideline in petty drug-peddling. But if Alex is sullen and taciturn, she is far from a teen stereotype. Treut describes the film as a ‘coming of age’ story, but it seems that Alex already knows herself and her failings — it’s just that she needs the seclusion to discover and accept this. It’s significant that the first time Alex smiles is when she is training the horses, her increasing affinity with these creatures suggesting that, without being encumbered by social conventions, she is able to act and react naturally.

Two secondary characters serve to shine a light on Alex. One is Nina, a city-dweller who enjoys the farm for its literal and metaphorical distance from her usual life. The other is Kathy, another teen, an experienced rider who arrives at the farm midway through the action. Both characters are not really given enough backstory, and feel too much like conduits for Alex to express aspects of herself — Nina teaching her how to be ‘at one’ with the horses, and Kathy showing a better way to live/love. That said, neither character is stereotyped. Nina has a female partner in the city, but is not escaping from a failing relationship. Kathy comes from a privileged, moneyed background, but is not a snob.

“Nearly every dialogue scene is interspersed with more nature shots, over-amplifying the symbolism of the natural setting…”

The film is meant to be a meditation, rather than a drama with spikes of action and traditional character arc. The opening scenes make this clear, with repeated shots of the steady gaze of the horses in a wild rural landscape, where a train can only be distantly glimpsed. However, this is overdone. Nearly every dialogue scene is interspersed with more nature shots, over-amplifying the symbolism of the natural setting.