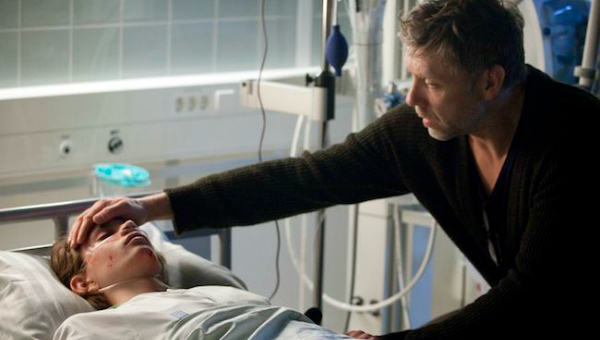 Perpetually tense, THE HYPNOTIST draws on and explores a wide variety of taboos, creating a film that both captivates and surprises. Its opening sequences use standard ‘atmospheric thriller’ tropes, but these belie the film’s subsequent incorporation of much more individual stylistic and structural elements. The film’s impact relies on its ability to combine ethical, political and familial concerns into its main plot line, thereby creating multi-layered interest and developing a crime narrative into a more broad examination of human behaviour.

THE HYPNOTIST is at its most fearless in its depiction of the impressionability of children towards would-be predators. However, film deftly avoids a gratuitous or potentially titillating approach by considering this aspect as only one amongst other examples of adult exploitation and responsibility. Indeed, it is the relationship of child and human agency which brings into play the film’s most affecting sequences. These provide an emotional peak which suggests an engagement with this challenging theme, rather than a dismissal of it.

Nonetheless, THE HYPNOTIST also touches on deeper, adult issues of medical diagnosis, abuse of power and professional misconduct. It is impressive that these more abstract themes do not derail the film, which remains aesthetically powerful and often purposefully grotesque. Indeed, these ethical areas could perhaps have seasoned this film even more: the taut narrative and spare camerawork would have allowed room for elaboration on the film’s title issue without detracting focus from the main plot. This is also true of several prominent characters: their stories and motives were clear enough, but paled in comparison with the rich, complex and emotive figure of Erik Maria Bark (Mikael Persbrandt).

It strikes a careful balance of enticement and repulsion…

Although the unwavering focus on Bark’s character occasionally becomes frustrating, the resulting depth of his characterisation has enabled director Lasse Hallström to create a series of enormously powerful moments which play on Bark’s emotional vulnerability. In a chaotic and tumultuous collision of events, the film’s major familial, professional and philosophical threads are brought together over the gradual submersion of a vehicle. This is a truly unsettling sequence that highlights THE HYPNOTIST’s potential for combining both emotive and aesthetic craft in a highly potent cocktail. It is also this combination of emotion and aesthetics that allows the plot to unfold in piecemeal and unexpected ways, and ensuring therefore that the core of the film – the intelligent solving of a crime – is not deflected by superficial or emotive tools.

The now-established Scandinavian tradition for compelling, no-nonsense thrillers means that THE HYPNOTIST already has expectations to live up to, and it manages to deliver and go beyond these. It strikes a careful balance of enticement and repulsion, allowing the film to incorporate both rich human depth and a relentless narrative drive. Although the plot begins to meander towards its climax, and particular characters remain underwritten, THE HYPNOTIST’s bold approach to its difficult subject matter nevertheless demands attention and engagement throughout. It is rightfully unapologetic in its areas of enquiry, thereby pushing the boundaries of the thriller genre to great effect.