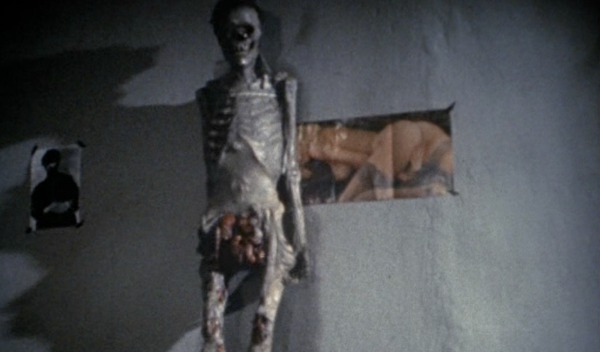 NEKROMANTIK, the controversial 1987 picture from Jorg Buttgereit, is being made available in the UK for the first time since its creation. It also screens as part of The Cambridge Film Festival. Ewan Cant is overseeing Arrow Films’ production of NEKROMANTIK’s new release.

Edd Elliott: Ewan, you are currently responsible for producing Arrow Films’ new DVD and Blu-ray release of NEKROMANTIK, screening here at The Cambridge Film Festival next week. I know the film is a particular passion of yours. Maybe you could begin by just briefly describing the film’s production, immediate reception and long hiatus up until now?

Ewan Cant: NEKROMANTIK is the 1987 feature debut of cult German director Jörg Buttgereit. Before filming NEKROMANTIK, Buttgereit had built up something of a reputation for himself on the Berlin underground circuit with his shot-on Super-8 short films, which he used to screen around the punk clubs. These early shorts were for the most part horror-themed, but they also displayed a great deal of humour and playfulness. Take, for example, BLUTIGE EXZESSE IM FUHRERBUNKER (‘Bloody Excess in the Leader’s Bunker’) which sees Adolf Hitler, re-cast as a Dr. Frankenstein figure, attempting to reanimate his dead lover Eva Braun – who promptly awakes and proceeds to chop the Führer into pieces aided by a Germanic breeding bull (played by Buttgereit himself).

Although traces of this playful sensibility can be found in NEKROMANTIK, Buttgereit’s first movie proper is a much more straightforwardly bleak affair -– and the film is all the more potent for that. In Berlin, the film was generally well-received by those that saw it on one of its underground screenings. It was only when the film travelled abroad that it really started to build up a cult following, through screenings at places such as London’s legendary Scala Cinema. It was these sorts of screenings that truly gave birth to NEKROMANITK as a cult phenomenon.

As far as censorship goes, NEKROMANTIK didn’t really cause much of a stir in its native country, the low-key nature of its release ensuring that it remained firmly off authorities’ radars. In the UK, NEKROMANTIK was never formally submitted to the BBFC – although it did do a roaring trade on various bootlegged versions throughout the early ’90s. I can only assume that due to the political climate of the time (the Video Recordings Act had been passed in 1984) no legitimate British distributor saw fit to touch the film with a bargepole. Certainly if the film had been submitted to the BBFC back in the late ‘80s, the odds are that it would have been banned outright owing to the subject matter.

Of course, fast forward some 25 or more years later and we’re now in a position where we can release NEKROMANITK in the UK fully uncut. Looking back to a few years ago when I was scouring the internet for $90 copies of the old US DVD, I would never have thought that possible!

EE: Moving on from this, what has your’s and Arrow Films’ role in producing the DVD and Blu-ray been, and what was the process behind this?

EC: Well, the project was handed to me to pretty much run with after the deal was signed – I had made my colleagues well aware how eager I was to work on it! As with any of our releases, one of the first things to start thinking about when you acquire a title is what you’re going to do in terms of extras. Our focus is very much on creating a deluxe package that caters to our fan’s high expectations, and ensuring that our releases contain a wealth of interesting and informative extras is a huge part of that. In terms of existing extras, some of these were already supplied under our agreement, whilst others I have been working to acquire for our release. Being a big fan of Buttgereit’s work, I was particularly adamant to include some of his short films on our release, and thankfully we’ve managed to make that happen.

Of course, it wouldn’t do to just put out a disc with old extras so to that end I’ve also been working on putting together some new special features for our release. In particular, over the past few months I’ve been laying the groundwork for what I hope will become an interesting piece concerning the legacy of NEKROMANTIK in the UK. A lot of that remains work in progress and I’ll be continuing to beaver away on preparing the extras in the coming weeks leading up to release.

Alongside the extras, another highly important element in the creation of an Arrow Video release is our newly-commissioned artwork. For each and every title we put out we commission an artist to concoct their re-imaging of the film, to adorn the main cover of the release (with the original artwork included on the reverse side of the sleeve for the purists out there). We have some great artwork in the pipeline which I’m hoping will appeal to fans old and new…

EE: Talking of the film itself, obviously NEKROMANTIK’s content is extreme. I was surprised whilst watching it, however, quite how playful, how light the film treated its narrative, particularly in comparison to many modern, graphic horror films. Do you think it is this that really sets the film apart?

EC: Absolutely. I think the tone of the film is what’s most disturbing about it when you watch it for the first time. Certainly that’s what struck me on my first viewing. Obviously with such a title, you go into it expecting to be assailed by grotesque imagery and transgressive subject matter – but it’s the manner in which all this is presented that you’re not prepared for. Much of this I attribute to the remarkable score, which I think really signposts the film in terms of how you are supposed to respond emotionally to the events which unfold.

The most bizarre thing is the presentation of the key necrophilia sequence, which is not at all presented in the way you’re expecting. Again, this is mainly down to the music the filmmakers choose to employ. Throughout the film’s first act, which essentially is a build up to this sequence, you’re bracing yourself for this horrendously squalid scene of necrophilia, that you’ve heard so much about. And then it happens, and the soundtrack breaks into this soaring, beautifully stirring piano piece, that seems far more suited to a romantic epic than a grimy underground film about necrophilia. What on Earth is going on? You don’t know what to think… A moment which you expected to be presented as hideous and revolting is being depicted as glorious and romantic. It completely blindsides you and it’s these sorts of moment which make the film a truly beguiling – and ultimately, memorable – viewing experience.

EE: NEKROMANTIK screens at The Cambridge Film Festival, and is part of Scalarama’s touring selection. What lies ahead, and what do you hope will be the outcome of the screenings?

EC: I was always really keen to get NEKROMANTIK included as part of Scalarama  – Scalarama being a festival which celebrates the spirit of the original Scala cinema, and NEKROMANTIK being a film which, in the UK at least, made its reputation through screenings at that venue, it makes perfect sense!

We actually had Jörg over for a mini-UK “tour” recently, which kicked off at London’s FrightFest with the first ever HD screening of NEKROMANTIK – at 3:30pm on a Sunday afternoon, no less! Jörg was good enough to stick around for a lengthy Q&A afterwards and he gave the audience lots of great insights into the film. It was particularly interesting to gauge the reactions of people who were seeing the film for the first time – apparently we only had the one walk-out!  We followed up the FrightFest screening a few days later with another screening of NEKROMANTIK+ Q&A at the CCA in Glasgow, this time preceded by the short film HORROR HEAVEN. It was a really fun evening and a few people brought along their old VHS copies of Jörg’s for signing, which was great to see.

In terms of what lies ahead, more screenings throughout September as part of Scalarama (although no Jörg unfortunately, we had to give him a break!) and then our Blu-ray/DVD release of NEKROMANTIK later in the year. With the screenings, I’m really just hoping that as many fans of the film as possible get to see it on the big-screen and, of course, hopefully we’ll pick up some more fans along the way and drum up interest for our upcoming release

EE: Finally, Jorg Buttgereit returns soon for his first film in almost 20 years, GERMAN ANGST. I guess you must be pretty excited.

EC: Very much so! GERMAN ANGST is actually an anthology film which brings together three directors – Jörg Buttgereit, of course, Michal Kosakowski (director of the controversial 2011 film ZERO KILLED) and Andreas Marschall, who incidentally also designed the original poster for NEKROMANTIK. I spoke to Jörg quite a bit about his segment, called FINAL GIRL, whilst he was over in the UK. He says that it harks back strongly to his early films – so NEKROMANTIK fans have a lot to look forward to, myself included!