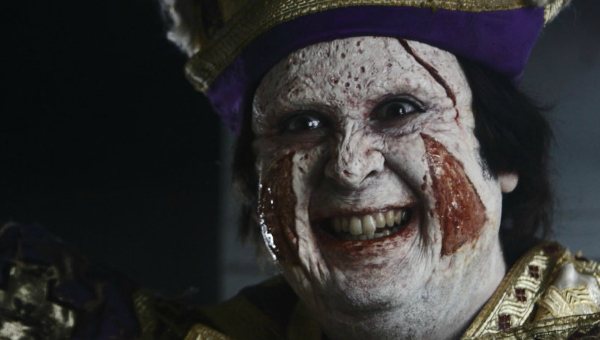 The surprise winner of the Silver Lion (and also the Best Screenplay award, for the first script the director had written on his own) at the Venice Film Festival in 2010, THE LAST CIRCUS (BALADA TRISTE DE TROMPETA) is in many ways a culmination or distillation of Álex de la Iglesia’s career up to that point, and the most personal of his films. Perhaps the bigger surprise is that it took him so long to set a film in a circus given his penchant for grotesquery, dark humour, and large ensemble casts.

Although the film opens with the sound of laughter, any joy in this tale is short lived and usually curtailed by violence. The film starts in 1937 with Republican forces co-opting a troop of clowns into their dwindling numbers before a scene of mass carnage unfolds with the grotesque absurdity of war encapsulated by the sight of a be-frocked and be-wigged (with blond ringlets) clown (Santiago Segura) charging his way through Franco’s men with a machete. Grand Guignol a la española. The clown is spared execution but put to work in the construction of the Valle de los Caídos (‘Valley of the Fallen’ – Franco’s immense monument to those who fell during the Civil War, it claimed more lives during the eighteen years of its construction) where he will eventually die. He tells his young son Javier that the boy is destined to be a payaso triste (sad clown) because of the suffering he has already endured, but that perhaps revenge would allow him to cheat his fate: he plants a poisonous seed that will come to fruition many years later. The film then moves to 1973, where the now-adult Javier (Carlos Areces) joins a dilapidated circus as a payaso triste and finds himself in constant confrontation with the payaso listo (smart clown) Sergio (Antonio de la Torre), when Javier falls in love with Sergio’s trapeze artist girlfriend, Natalia (Carolina Bang).

Sergio is a violent and monstrous bully and the question for the sweet-natured Javier is how monstrous he himself will have to become in order to free Natalia from her violent relationship. The film is uncomfortable viewing, not simply because of the genuinely horrific violence (and its disturbing aftermaths) but also because of the ambiguous suggestion that Natalia enjoys the pain inflicted on her by Sergio (the director has summarised the treatment of sex and violence in the film as that of two men who suffer for their love of a woman who enjoys her pain). While many of de la Iglesia’s films feature two characters locked in a violent opposing struggle – the comedy double act in DYING WITH LAUGHTER (MUERTOS DE RISA) (1999) springs to mind – in this instance they most obviously stand for the Two Spains, the divisions embedded within the country and the damage each side does to the other, as manifested in the Civil War.

The film’s concern with Spain’s political and ideological context is signalled from the outset in the impressive opening credits (designed by David Guaita), in which the iconography of politics (images of key politicians and members of the regime), religion (the suffering of Christ on the cross as represented by the likes of Bacon and Grünewald, along with priests in their finery, and sinister hooded penitents), and culture (television shows, films, music stars, and Spanish ‘personalities’) are edited together to distil almost forty years of the Spanish psyche under the dictatorship: the opening credits effectively represent the making of a fractured and disturbed modern Spain. Likewise, more so than the director’s other films, THE LAST CIRCUS is located in a concrete time and space in the way that historical events are threaded through the film either in the form of television shows and newscasts (the recurring attention paid to the escapades of El Lute, Spain’s most wanted criminal) or as an actual interruption of the narrative (the assassination of Carrero Blanco).

In interviews at the time of the film’s release in Spain, de la Iglesia stated that Francoism in its decline was like the pre-history of his life, the era a mixture of dream and nightmare (the director was eight years old in 1973), and that he made the film as a exorcism of the pain in his soul that he had been unable to get rid of since that time. He wanted to annihilate the hate and the pain with a grotesque joke that could make you laugh and cry at the same time. A dark, bitter humour pervades the film, but there is little to laugh about and an extreme melancholy is the overriding emotion (as indicated by its Spanish title, which translates as ‘Sad Trumpet Ballad’), although that is contradicted by the energetic brio and excess of the image making. The final image of the film, the bleakest ending in any of de la Iglesia’s work, encapsulates the director’s intent: two mutilated men crying so hard that they appear to be laughing.