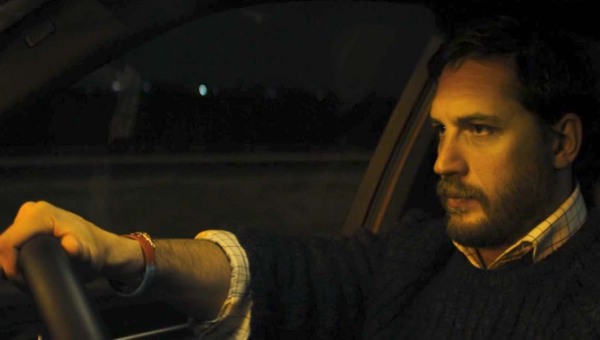 Joining a select group of films distinguished by confining themselves to a single location (see also: LIFEBOAT, PHONE BOOTH), LOCKE is less a Hitchcockian thriller than it is a subdued, emotionally-driven drama which just happens to take place entirely within a car.

In fact it is more audacious than either of its aforementioned brethren, as we only ever see one character onscreen – that of Ivan Locke, played by a bearded and be-Welshed Tom Hardy. The only other characters are voices at the end of his phone (played by a surprisingly strong supporting cast), and it is through these conversations that we learn why Locke is making this particular journey.

Driving overnight from Birmingham to London, Locke – a building engineer by trade, specialising in concrete – struggles to prevent both his professional and personal lives from collapsing around him in a matter of minutes. Whilst juggling phone calls between various parties, he also chides his father (largely absent during his youth) by talking to the vacant back seat through his rear-view mirror; the son is now in the driving seat, the past literally behind him – or so he thinks.

Steven Knight’s script is full of such visual and verbal metaphors, some of which work better than others. It quickly becomes clear that Locke is a man who seeks to control life as far as possible; if everything is anticipated and planned for, nothing can go wrong that can’t be fixed. This simple philosophy extends beyond his profession, where exactitude is an essential trait, to his private life. The idea that life’s trials and tribulations can be overcome by sticking to the plan is one that is sorely tested; a grand self-delusion to which he clings. The natural born engineer in Locke is forced to face up to the fact that perhaps some things are beyond fixing. It’s a shade heavy-handed, but it works.

Hardy’s performance is, to continue the building metaphor, the firm foundation on which the film’s success stands. Sounding quite like Michael Sheen at times, the calm, measured tones of his Welsh accent cleverly convey a sense of the man’s regimented character. As a story that in essence boils down to its vocal performances, his registers just as strongly as the rest. In fact the others occasionally seem disconnected, sounding too obviously performed for the microphone rather than the audience. It is sufficient to break the illusion on occasions, though not fatally.

Knight has no such problems behind the camera. Using a variety of angles both inside and outside the car, he succeeds in building a noir-ish atmosphere of suspense as Locke’s predicament slowly unfolds. Crucially, it feels cinematic rather than a filmed theatrical experiment. Locke’s long dark night of the soul takes place on a purgatorial motorway to Hell, the artificial light from streetlamps and headlights only adding to the gloom. The traffic may be light and his strict adherence to the speed limit may keep him safe, but there is no way to change his destination. LOCKE is a stylish exercise in delivering a compelling story with little in the way of toys or tricks.

One thought on “Locke”