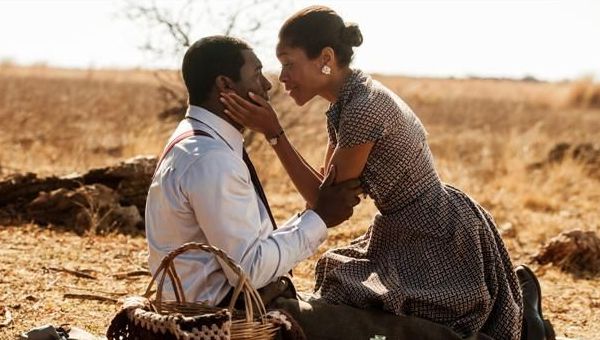 A deserving subject is given an ill-deserved biopic treatment in MANDELA: LONG WALK TO FREEDOM. Though Justin Chadwick’s film may work as a superficial overview of the late icon’s life, from his upbringing in a tribal village to the moment he entered office as South Africa’s first black president, it suffers from a script that tries to do too much in too little time and is chock full of trite directorial devices, as though the audience couldn’t be trusted to stay awake. What makes the film entirely watchable are the central performances from Idris Elba and Naomie Harris, who bring much needed dignity and gravitas to the piece.

Adapted from Mandela’s autobiography by GLADIATOR and SHADOWLANDS writer William Nicholson, Chadwick starts as he means to go on: with lots of gloss but precious little depth. Warm, soft focus shots of Nelson’s childhood home quickly give way to a potted history of his legal career and membership of the African National Congress; his ensuing involvement with that organisation’s military wing; his arrest, conviction and imprisonment on Robben Island; and finally his eventual release. An early first marriage quickly disintegrates, but he soon after falls in love with kindred spirit Winnie (Harris), who sticks by him throughout his interment.

Scenes quickly come and go in order to fit in as much as possible before the film hits the two and a half hour mark.

You know a film’s in trouble when a supporting character is more sympathetic than the main subject, especially when it’s an account of that subject’s incredible true life. The plight of Winnie after her husband is locked away provides some plot impetus while he has little to do other than endure the taunts of the guards and the passing of time. The struggle to make their marriage survive the separation, even as their chosen paths begin to diverge, is as close to moving as the film gets. It is easy to sympathise with Winnie’s increasingly hardline, militant attitude given that – according to the film – she seemed to have a worse time of it than her husband.

In all other respects, the film faithfully recreates Mandela’s gradual rise to the top of the political tree. But it lacks any tangible emotional pull: social injustice, popular uprisings and violent retribution are all present and correct, but obscured by muddled directorial tickboxing. Scenes quickly come and go in order to fit in as much as possible before the film hits the two and a half hour mark. The soundtrack and photography strive to mimic Ridley Scott one minute and 24 the next. The final realisation that Chadwick has let this one get away from him slams home when a U2 track pops up over the end credits; a crass commercial gesture which drags the film far below what it should have been.

At least Elba’s effortless charisma stops it from sinking completely; he makes it easy to comprehend how Mandela’s star rose so swiftly in the eyes of the majority black population. Despite his considerable height and sturdy build throughout several decades of story, Elba deftly captures a man bristling with confidence in his youth, which gives way firstly to anger at the injustice in his country, then later determination and political wisdom. The actor dominates the film in the same quietly magnetic way the great man himself did wherever he went. Harris is also very good as Winnie, on her own journey as a persecuted mother. More time focussing on the characters rather than succumbing to details and clichés might have lifted this above average, but as it is, there isn’t much to trouble voters in the forthcoming awards season.

One thought on “Mandela: Long Walk to Freedom”