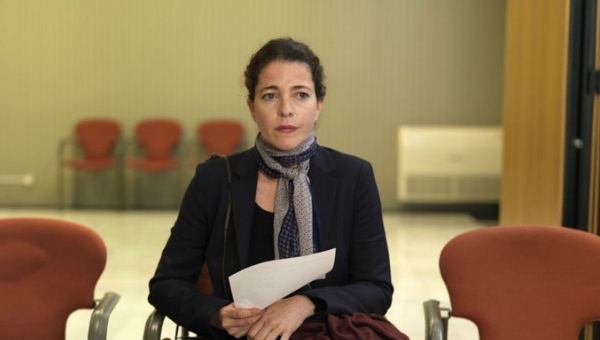 A year after an almost-fatal car accident, Geni (Nora Navas) seems ready to get her life back on track, much to the relief of family members who want her to return to ‘normal’. However, from the outset of the film – a doctor’s appointment during which Geni tries to intuit the correct answers with mixed results – the audience sees what her family does not: Geni has not fully recovered and is struggling with the expectations placed on her. In fact, Geni’s old life no longer holds any appeal for her and WE ALL WANT WHAT’S BEST FOR HER follows her attempts to escape the life that has been laid out for her.

Of the supposedly supportive, but actually suffocating family group, only Geni’s sister Raquel (Ágata Roca) tries to offer genuine support and listen to what she actually says, while Geni’s husband Dani (Pau Durà) is controlling and paternalistic, aided and abetted by her dismissive older sister Gloria (Clara Segura). Director Mar Coll (2010 Goya Award winner of Best New Director for her previous film, THREE DAYS WITH THE FAMILY (2009)) and DoP Neus Ollé film Geni’s home in a palette dominated by shades of blue, reflecting the protagonist’s mood but also supporting the presentation of a woman in stasis, frozen in an expected mode of behaviour.

What could be a tragedy becomes tragicomedy…

An opportunity for metamorphosis occurs via a chance encounter with a girlhood friend, Mariana (Valeria Bertuccelli), and Geni finds her youthful ambitions of travel and adventure rekindled. What could be a tragedy becomes tragicomedy, as Geni takes the reunion as an impetus to put change into action and regresses to her giddy and guffawing teenage self in the wayward Mariana’s company, much to Dani’s bafflement. But as Geni attempts to recapture her youth – imitating her friend’s appearance and trying to pull Mariana into an adventure – she will nonetheless find that she is not the same person she was at eighteen, and Mariana knows it.

Nora Navas (recipient of several acting awards in Spain for this film) ably runs an emotional gamut from deep loneliness to a rediscovered twinkly-eyed mirth, and gives a nuanced performance that subtly suggests Geni’s gradual recovery. The limp caused by the injury to her knee remains throughout the film, but Geni’s problems with speech, memory, and cognition – performed by Navas as somewhere between a stutter and the flustered frustration of blindly grasping for a word that is elusively out of reach – subside as the film progresses. Raquel’s suggestion that writing down a wish helps you to achieve it – define a thing and it exists – finds form in Geni starting to recover verbal dexterity in parallel to setting out to get what she wants. Geni’s affluent social milieu could have caused her search for a self-defined identity to seem like bourgeois self-indulgence, but Mar Coll and Nora Navas have instead crafted a sympathetic and human portrait of a woman in crisis.

Anthony Davis spoke to director Mar Coll after the screening, focussing on the mental health related themes in the film. An extract of the interview follows.

Anthony Davis: A psychiatrist is mentioned, but I think that the doctor whom we see at the beginning is just an ordinary doctor?

AJD: Which she would have done, with such a big accident…

AJD: She wanted to be discharged… ?

MC: Yeah, everybody was very kind for taking care of her, with her knee, and in the scene there was also a speech therapist.

AJD: But stuttering and stumbling is sort of stress related, isn’t it?

MC: Absolutely, yes – in the film, we can notice that when she’s between people who don’t know of the situation she’s in…

AJD: Of course, she’s got used to lying about the situation anyway. It’s easier to lie…

MC: Yes, she’s trying to escape from all this stigma.

AJD: Which is a huge, huge thing, particularly with mental health issues, but also with other things…

MC: Yes, the stigma – she thinks everybody knows that she has a problem, and that even though they try not to tell her, she can sense everybody’s worried – and that’s not what she wants.

AJD: She can’t get away from that with the family – and so she reads that into other people and then she gets nervous and she thinks they know …

MC: For example, it’s terrible when her friend Marianna says, tells her at the end, “sorry about your accident” – and says “you cannot have alcohol, so I’ll bring you a glass of water” – for her it’s like the end, because one of the things she had with her is that there’s not all these things of the accident that is between them.

MC: Yeah, she needs to be sincere. But the reaction of the best friend is a little bit similar to the others’, in a way. When she’s upset, it’s normal, but she feels a little bit persecuted.

AJD: You said in the Q&A that it’s like something that she’s built up as a fantasy, and we don’t really think that it’s going to work.

AJD: But it’s creative – even if it doesn’t work, she’s still looking outside this ‘box’ that we talk about – she’s looking at other possibilities. And, I think the ambiguity at the end is fine, we leave her to what she does. We don’t know what she does, but…

MC: Yes, it’s important that she does something for the first by herself, and it’s so much by herself that not even the audience is aware of what she’s going to do.

AJD: Towards the end of the film, when she’s left Marianna, she’s upset – because at Marianna’s she’s actually found something about herself.

MC: Yeah, absolutely. It tends to be with the character growing, maturing, because all the things that you see – we see that, at the beginning, she’s a little bit like a kid and very, um, naïve in some ways.

AJD: The way she behaves like a child when she becomes creative, though…

MC: It’s nice – something that we like to explore is that sometimes this way of relating to things is very pure and very direct.

AJD: It feels intuitive as well, doesn’t it ?

MC: It’s much more powerful, in some ways. I definitely think that there are some things of the child that we shouldn’t forget, and we shouldn’t lose, although we do – it would be nice, if we didn’t.

AJD: Well, it’s a rather boring distinction that they make, in psychological circles, between being ‘childish’ and being ‘child like’. ‘Child like’ is OK, because it can be trusting, and it can be coping?

MC: But I think that this character of Geni might preserve some of these child-like characteristics, but at the end, when you say that there’s some dignity in her, it’s like she’s not behaving – she’s behaving like someone very sure about what she will do. Not an insecure teenager like before, where she’s finally made a choice.

Buy a copy of WE ALL WANT WHAT’S BEST FOR HER on DVD here.

One thought on “We All Want What's Best For Her”