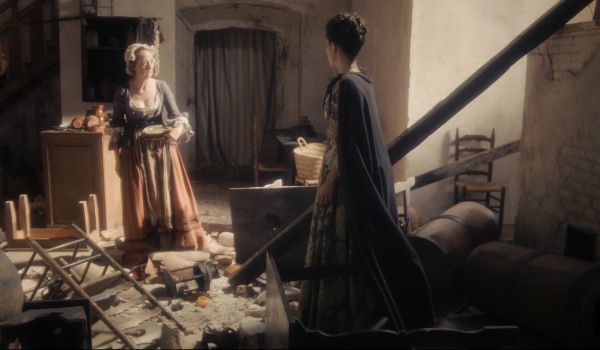 The money shot stains the screen. Drains the screen of light in fact. Sure, a couple are rutting upon an artfully arranged Late Baroque styled room, complete with a handy dresser mirror to help the viewer fill in all a few angles. But ignore that. director Claudio Zulian dares show something of the nature of real light. It ebbs. It flows. It flits behind a cloud. You’ll recognise this if you’ve ever lounged upon a bed on a cloudy day.

Zulian and his cinematographer, the Albert Serra collaborator Jimmy Gimferrer, play with the light throughout BORN to splash on the otherness of early 18th century Barcelona. Family meetings take place in dingy parlours; sunshine streams through open windows; tight streets offer the hope of greater illumination. It’s all to no avail of course. These characters never quite emerge into direct exposure. This may be deliberate given that the film takes its inspiration from the parts of the Born district of Barcelona that were demolished following the Spanish Wars of Succession. The light may aspire to BARRY LYNDON levels of naturalism yet the architecture underpins it all both then and now. Today the ruins may be viewed under cover in the El Born Centre Cultural. Something of this lingers here.

These people seem like vagrants, lost in time in their own city.

That link to modernity crops up with the main issue ruining the character’s lives: cash. Based upon a historical work on the suburb from Albert García Espuche, Zulian pulls together a trio of interlinked characters wandering around the doomed cobblestones. Each receives their moment in the candlelight before popping up in each other’s stories. Each is broke. One character, Bonaventura, receives his marching orders from his digs. In true housing-crunch logic he promptly evicts somebody else. Of the other two characters, Bonaventura’s sister Marianna, opts for prostitution when the funds evaporates and local businessman Vicenç sees opportunity in cornering the tobacco market provided he can bet on the next monarch correctly.

For a contemporary Spain reeling from the neo-liberal battering of austerity politics these people are all familiar victims. The beauty, of course, is that they are also dishing it out. The system propagates itself. Besides Bonaventura’s dodgy dealings, Marianna struggles to force one of her lovers into a contract ratifying their relationship financially and Vicenç squeezes an indebted friend for his house. You suspect that Bonaventura and Marianna might be voting for the Spanish anti-austerity political party Podemos these days.

Marianna proves the most compelling of the bunch. The young widow forced into selling herself is stale plotting and the female nudity shown here hardly reassures that this depiction is going to be any different. Yet, following that sex scene with the shifting light, Zulian gives the character an unusually long scene gazing into a mirror. Having used her body she is now rewarding herself both immediately and with the promise of the material riches to come if she can snag a rich enough lover. Vicky Luengo’s portrayal far surpasses the normal passive role you might expect. Those long minutes spent starring in the mirror share company with a few other wordless vignettes in BORN. One holds the gaze Marianna’s ‘madam’ as she endures the bombardment of the city in a cellar. She holds her head high, cradles someone in her lap and shudders as mortars continually pound above.

Using what seems to be real historic locations grounds the characters in their setting. Yet the backdrops often seem overly worn for such human concerns as living. These people seem like vagrants lost in time in their own city. One can almost smell the mopped floors of museums. You get a similar effect in other films that use real historical buildings earlier in their timeline. Just look at the knackered Italian castles, old before their supposed time, in the medieval-set LADYHAWKE. Yet Zulian’s architectural ploy serves its purpose as the sounds of contemporary urban life surge over the ruins at the end of BORN testify.

One thought on “Born”