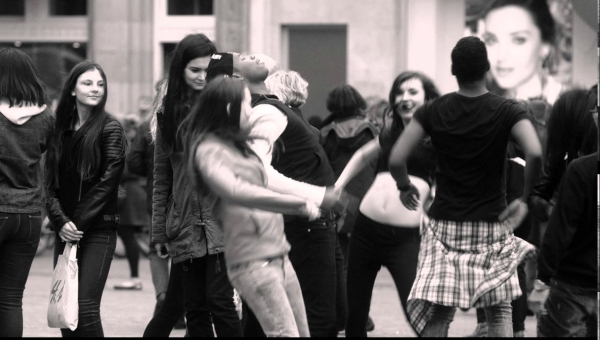 Finding the right category for Farshad Aria’s film DANCE IRANIAN STYLE is not an easy task, a 90% fictional film which could be considered a docudrama or docufiction were it not for the film crew’s presence being integral to the film’s story. “Nondocumentary” might be the most appropriate term.

Inspired by the struggle of refugees and immigrants who come to the Netherlands to find a better life but who are denied the right to reside in the country, the director and his small crew act as themselves as they convince Roya, a young Iranian girl, to let them document her aimless life after she learns she is now an illegal resident in the country. Roya, too, is only a fictional character, played by actress Sarah Montazeri.

Over the next four days the crew follows her wandering around Amsterdam looking for food, a sheltered place to sleep and something to fill her time, which sometimes is dance related, for, as Roya informs us at single point, dance has always been important to her.

One might be forgiven if one were to initially confuse the film with a real documentary, as it starts off with a series of interviews with immigrants describing the harsh conditions they came from and the ones they found. This initial part, at least, seems genuine, and among them is Roya as well, but as soon as we start following her the scripted nature of what unfolds is obvious.

Why not make a proper documentary, then? Was it too difficult?

It is clear that there is no rigid script being followed, that there are improvised moments involving people who are unaware that they are being filmed, but at the same time one cannot escape the feeling that the main turning points are manufactured. The director himself seems to be aware of this fault, and has included a few scenes in which he, as the real director, talks to the actors as themselves, though it is unclear if these interactions were or not scripted as well. These moments, however, lack any poignancy, and one comes to wonder why they were included at all.

Why not make a proper documentary then? Was it too difficult? Were they no volunteers among the immigrants actually going through this? Would the material not have been interesting enough if the protagonist could not have been endowed with some synthetic affectation such as an obsession for dance? Or why not make a proper fiction film? The director claims he wanted to avoid a sob story, but was there no way to anchor a fiction film in realism while avoiding cheap sentimentalism?

Instead, we receive a dull 81 minute film in which an actress is unconvincingly playing at “wandering homeless refugee” while a film crew is trying to convince us they are guerrilla documentarists. While one cannot deny the director’s best intentions at exposing a real situation, which gains in poignancy due to the current socio-political events surrounding the waves of Syrian refugees, the film still fails to offer any sort of insight into that situation.