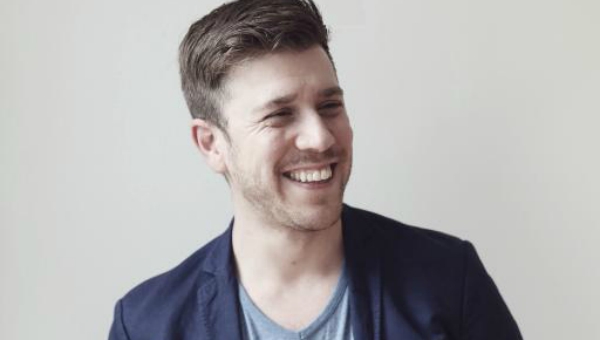 PRETEND WE’RE KISSING is a rom-com that sidelines princesses and happy endings in favour of awkward flirting, beanie hats and poor social awareness. As such, Matt Sadowski’s film is a charming but very frank portrayal of Benny (Dov Tiefenbach) and Jordan (Tommie-Amber Pirie) as they attempt to navigate their way through their respective character flaws, as well as past Benny’s self-diagnosed agoraphobic housemate, Autumn (Zoë Kravitz). The result is a beautifully-shot film that both delights and frustrates with its determination to be a misfit. We spoke to director Matt Sadowski about what he refers to as his “non rom-com”.

Emma Wilkinson: How easy have you found the transition from acting to directing? Has your acting experience been formative in the way you go about filmmaking?

Matt Sadowski: As I was growing up, my brain was stuck in “director mode” and my heart was in love with acting. There was a point when I was on-set as an actor where I couldn’t think about anything other than how the scene was being framed and lit. Obsessed with watching how the crew worked. Figuring out how it would be edited and scored. What would I do differently? This was pretty unfair to my scene partners as my focus was elsewhere. When I made the decision to step back from acting, it was like a weight lifted from my shoulders. I’ve always felt that one of my weaknesses, is that I lack a lot of the technical flair that other directors have; but have been told that my strength is that many directors are intimidated of actors. I’m not. I understand how they think and feel. How they breakdown a scene, and how to write a scene for them to play, or how to fix a scene they’re having issues with. I also understand that a lot of acting just comes down to casting.

EW: PRETEND WE’RE KISSING is delightfully off-beat in many ways; how did this tone come about? Was a non-traditional atmosphere something you particularly aimed for?

MS: I think “delightfully off-beat” is how my parents might describe me! Much of the tone came from in the writing itself, my character, the actors I cast, and the framing. Letting the camera linger so long on those anxious and uncomfortable and awkward moments, really established something that, I think, goes against the look and feel people expect from rom-com and low budget indie films. Non-traditional is a phrase that was post-noted on my computer, as a reminder through development, production and post.

EW: Could you tell us a bit about the writing process for the film? Was everything exactly scripted, or did you leave wiggle-room for improvisation?

MS: This is going to sound corny, but I started writing the film after I had fallen in love (with who ended up being my wife), and it felt totally different. I looked back at my failed relationships and started to realize how being so stuck in my own head was what stood in my way of what I wanted, which is essentially Benny’s problem. The film certainly isn’t a biopic, but a lot of it is based on situations I found myself in, or things I observed or overheard. For me, writing is easiest when you write what you know or what you see. What you said or what was said to you. Which is probably why the dialogue feels so authentic. I also cast actors who I believed would sound genuine. Dov, Tommie and Zoe lived and breathed in the skin of my characters, and though there were moments of improvisation in, almost every scene is the film was performed from the screenplay word for word.

“Toronto is a city that, like Benny, is under construction and is eager to please.”

EW: Given the slightly unusual nature of the film, were you at all nervous about its mainstream reception? What impact would you ideally like it to have?

MS: The funny part of that is that I’m a pretty nervous person. The difficult thing about my film is that it walks like rom-com but it doesn’t talk like one. And that I have romantic lead who you either really identify with personally, or who you want to throttle. I wanted to subvert the tropes of the genre, and I understood that by doing that, I also had to rely on finding a niche audience. I think most people can agree that even the best relationships have to work through some extremely awkward moments and that our inner critic is an asshole – and it feels good to see that honestly depicted on screen.

EW: The film is full of really rich backdrops of Toronto – are there any particular qualities of the city that you enjoy working with for screen?

MS: Toronto is a city that, like Benny, is under construction and is eager to please. It can play every city because it really can be anything to anyone. But to me, it’s the city I grew up in and love, despite its flaws – and I just wanted to show it off, like a new girlfriend.

EW:   Do you have anything in particular in mind for future projects you’d like to pursue? Will Toronto feature in those, too?

MS: I’m working on a few projects. One near and dear to me is a film based on a novel, about a homeless and drunk amnesiac that is on a journey to figure out who he is. It’s a very different script than PRETEND WE’RE KISSING and has been a passion project of mine for a long time. I just finished an original treatment for another atypical rom-com called She Smiles At Him and have begun collaborating on DON’T LET ME DOWN, a film about a father who moves in with his adult son. It’s a bitterly funny take on a 21st century family dynamics.