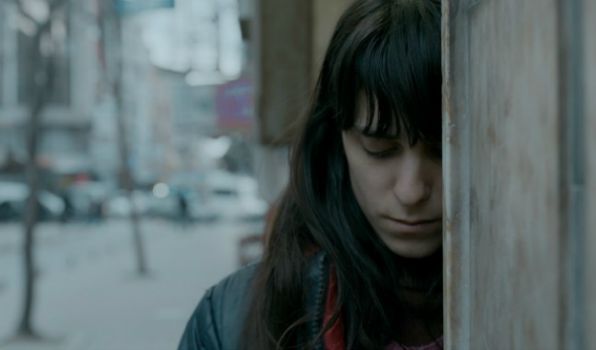 UNTIL I LOSE MY BREATH, a bleak story of social hardship, is the feature-length debut of Turkish director-screenwriter Emine Emel Balci.

The protagonist, Serap (Esme Madra), is a young girl who works in a lowly position at a garment workshop on the outskirts of an unnamed Turkish city. Working long, hard hours for little pay, she returns home to her sister’s house, to be body searched by her brother-in-law for withheld cash. She dotes on her father, a long-distance lorry driver, but he clearly wishes to be away from her and doesn’t, in the end, repay her desperate affections.

Serap’s world is one where everyone needs to do what they need to do to survive, where friendship isn’t given without some kind of compromise. Madra plays her role with sullen conviction, like a kicked dog who doesn’t want to be beaten again. From the first scene, where she searches for her returning father at the haulage depot, we are brought along with Serap on her journey, as the jittery hand-held camera follows close behind. Indeed, the camera never loses sight of Serap, with scene after scene holding her in close up while the background characters are blurred and indistinct. As a means to force audience identification with the character, it’s overplayed, but Madra’s naturalistic performance helps to hold that in check.

The main problem with UNTIL I LOSE MY BREATH is that it is unremittingly bleak: from the use of industrial and inner city locations with a blue-grey or bleached colour palette, to the life of its main character. That’s the point perhaps, to show how little possibility of escape there is for Serap. Her resourcefulness helps her to possibly find a way out in the end, but we wonder at what cost – she has to beg, lie and steal to get there. Balci clearly wanted to build a realistic narrative with a strong female protagonist, but she betrays her film school roots in the construction.

UNTIL I LOSE MY BREATH screens on 12 September at 18.30 at the Light Cinema