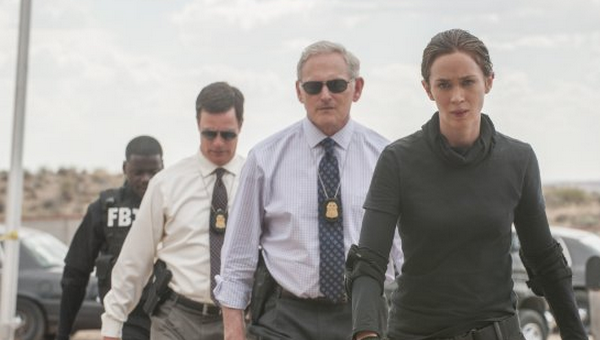 In 2013, Denis Villeneuve’s PRISONERS made an impression with an unrelenting intensity and atmosphere that immediately grabbed the viewer. Villeneuve’s new film, SICARIO, strings out tension in a way that makes it feel quite literal – like a guitarist tuning his instrument to the point you can hear the strings quivering with it.

Emily Blunt plays Kate Macer, the narrative and moral heart of the film. Macer is an FBI agent who at the beginning of the story is caught in a gruesome drugs bust at a house in Arizona. A wider operation to get those “who are really to blame” in Ciudad Juarez quickly gathers pace, with opaque operative Matt (Josh Brolin) heading up affairs, backed up by the positively inscrutable Colombian Alejandro (Benicio Del Toro), blurring lines between legal and illegal acts and the motivations of all involved.

There are several action sequences, handled with patience and deliberate framing by Villeneuve without a hectic or rushed moment amongst the shots.

SICARIO is not short of violence, action and loud guns, but this is not the action film we’ve become accustomed to. There are several action sequences, handled with patience and deliberate framing by Villeneuve without a hectic or rushed moment amongst the shots. SICARIO is a modern and old fashioned film all at once. The modern resemblances come through strong. The American-centric world view and sparse (but effective) script recalls ZERO DARK THIRTY, and the film could easily work as a domestic companion piece to Kathryn Bigelow’s more globe-trotting and militaristic dramatisation; while the opening scenes in the South-West and juxtaposition of unvarnished drugs-related brutality against an idyllic American suburbia recall “Breaking Bad”. At the same time, the script leaves the actors to do the heavy subtextual lifting, and (for an action film) this seems an approach that is out of fashion.

At its best, this means SICARIO doesn’t just grab but arrests attention. Whether panning through a gruesome crime scene or a firefight, the building of tension from tracking shots rather than a frenetic cut-fest, the result is superbly executed. However, it’s hard to feel as if SICARIO – as well tuned as it is – is offering much that isn’t seemingly derived from other sources. The main players are deliberately obscure characters, but Benicio Del Toro’s Alejandro stands out: Del Toro achieves considerable depth from a necessarily understated cumulative screen time. His composure and intense stare conveys an underlying malevolence which will have you scurrying back to THE USUAL SUSPECTS just to check Del Toro wasn’t actually Keyser Soze after all. Brolin is an admirable supporting player, but the headline acts have to be Del Toro and Blunt, the latter given screen time but achieving much as the film’s silent moral compass.

His composure and intense stare […] will have you scurrying back to THE USUAL SUSPECTS just to check Del Toro wasn’t actually Keyser Soze after all.

Overall, however, it’s fair to say SICARIO opts for atmosphere over social commentary in the end. In addition, although Juarez is probably not like a Spanish-speaking Butlins, the horrendous version portrayed here could easily form part of Donald Trump’s campaign ads. But accuracy or controversy is not really the film’s end goal. When the credits roll it’s hard to feel it offers anything different to PRISONERS other than the story’s surface context. Thematically, the futility of the war on drugs seems to be a bass note underscoring the whole affair, but the high-pitched tension of those strained strings dominates. When brought together, it is clear we’ve heard this tune before but this version is tuned to an incredible and impressive harmony.