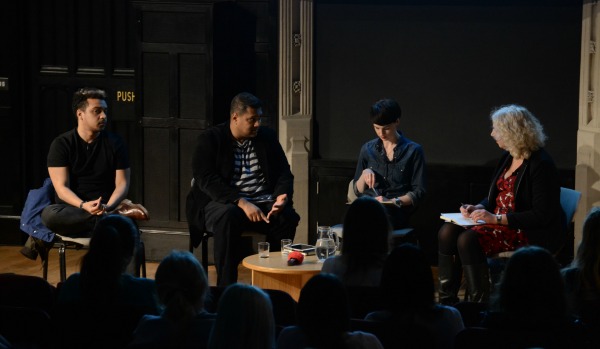 After all the controversy of the Oscars, how diverse can we say the film and television industries really are? Do they truly reflect the make-up of our society and our attitudes? How far have we really come in terms of equal representation of gender, race, sexuality etc. in these industries, and do they use their position of cultural prominence to influence our society for the better? Do they indeed reflect the ethnically diverse Britain in which we live?

How much progress have we made?

Jessica Raine (JR) – Well, film is still a very young industry. There definitely is a pressure as a woman regarding looks, and roles are restricted to the young and innocent, then grown-up barrister, then eventually old lady. It’s not that bad, but there’s still a way to go.

Krishnendu Majumdar (KM) – In the ‘80s, I was the only non-white actor. In the Bengali community there’s an expectation that you’ll be a doctor or a lawyer, do something stable. It’s hard to break out of that role and do something different.

Danny Lee Wynter (DLW) – You have long periods of not working. I remember one advert with the tagline ‘Drama Lives at ITV’, but it was not a world we recognise, there was no diversity. Actors need to do something, use their platform to raise awareness.

Which is best for diversity: Film, TV or Theatre?

DLW – Soaps on TV seem to embrace diversity in a way that film and theatre don’t. In theatre sometimes people are just there for being there.

So what about the representation of women on screen?

JR – I’ve had some crazy things in scripts, characters described as ‘casually gorgeous’, ‘so, so sexy doesn’t even need to take her clothes off’, ‘doesn’t like being objectified and is very pretty’, ‘intellectual but buxom’. I don’t know whether to laugh or cry, so you laugh about it of course. It is slightly better on TV – there are more female leads. But people should write a human being and not even care if they are male or female! I’d like to see EX MACHINA as a film where two women make a man robot, instead of men making the ‘perfect’ woman. BRIDESMAIDS is a great film though, as it shows women talking to each other, their friendship.

DLW – HAPPY VALLEY by Sally Wainwright was a great TV show too. Sarah Lancashire was allowed to be over 50, a parent, a grandparent, to have a sex life!

Are things better in the USA in terms of diversity?

KM – There are more opportunities in America for minority actors. It depends on who has the power to cast, pick and write. You write what you know, so if you are not a minority you won’t write about that. There aren’t enough minorities in those positions of power who get to choose.

DLW – The parts are there in the scripts, just not cast that way. CUCUMBER, cast by Andy Prior, is the most diverse British TV has done for a long time. Russell T Davies insists on diversity in sexuality, class, race, gender.

KM – The parts aren’t written as any one particular race but people want someone famous to bring in an audience.

DLW – You leave drama school believing that talent is enough, you don’t think about funding and all that in relation to race. But we reward the US like a student with a gold star: the things that are done well are the things we see, but there is also loads of crap out there.

KM – There are key people in power there – they can cast who they like. Racial politics are different. They are deeply racist in the US but they still have a black president. 24 subtly changed the national psyche – there was a black president on TV long before it actually happened. Here, you look at Idris Elba in LUTHER, but does Luther have any black friends?! But having a black lead on British TV is still progress.

So Jess, tell us about CALL THE MIDWIFE.

JR – I didn’t realise it was such an anomaly until I left. 80% of the producers are women, it’s very female driven. You rarely get a female director. But that must be a really annoying question, ‘what’s it like to be a female director?’

KM – I used to be on the Board of Directors UK, and in their research campaign on female directors, the stats were the same as in the ‘70s.

DLW – Men feel like they can’t talk about gender equality, but if they don’t it becomes a ‘female’ issue, so it gets worse. Sometimes female directors can be defensive – they close the door behind them to defend their position, but they don’t let other women in.

KM – Female directors are seen as ‘hard’ where men would be ‘strong’. But the technical departments are even more male and white.

JR – In Tina Fey’s autobiography, she says ‘I can’t change one man’s opinion, just be good at my job’.

DLW – Maggie Smith once said that there’s no difference between male and female directors, except that the female asks if your corset’s too tight.

And how are people with disabilities treated in the industry?

DLW – It’s impossible to get accurate stats on disability on stage as people don’t want to talk about it. It’s taboo. They have to hide it in interviews. Actors are transformers but disabled actors are overlooked for roles because they are seen as less adaptable. For example, Stephen Hawking was able-bodied at the beginning of the recent film, so Eddie Redmayne was cast instead of someone who actually suffers from Motor Neurone Disease.

JR – There was a deaf girl in my year at RADA. They had sign-language in every class for her. She’s still working now.

Does class come into it at all?

KM – The poor white working class can’t afford to do unpaid internships, so they then won’t get the jobs. That’s all due to change soon though.

How can you make a difference?

JR – The only thing you can do is say no to shitty parts. There’s this campaign called Ask Her More, where there are all these viral videos on YouTube which are funny because they are so ridiculous: women being asked ‘who are you wearing?’ Scarlett Johansson even got asked what underwear she had on under her dress! They wouldn’t ask a man that!

DLW – But then the fashion industry is related to acting, especially during the awards season. It’s entertainment, it’s part of it.

KM – But there’s so much focus on and snobbery surrounding actresses’ clothes.

How much of a problem is tokenism?

KM – You want to be there on your own merit, but then things need to change, so it’s necessary to have targets.

DLW – Quotas are the way forward. It scares people because they think the best person won’t get the job. Minorities also need to confront their own prejudices. They are not a token, but a beacon, an example to carry forwards. We shouldn’t be feeling we don’t deserve to be here.

JR – We need to stop putting ourselves down – enough other people will do it for you!

KM – Yeah, there’s Imposter Syndrome – do I deserve to be here?

But what about the industry and how films will be received in China or India where there is a less diverse attitude?

JR – But the industry is money-driven. Someone like Ridley Scott relies on million-pound studios.

KM – You don’t change something just to widen the audience.

JR – Don’t flatten it out to appeal to a wider audience – who cares?! No!

DLW – But there is casual discrimination even in our own friendships, in our own lives. You know, ‘Gay Chris’, ‘Black Paul’…we do it ourselves.

JR – It’s a confusing time. We’re not sure what’s ok to say and what isn’t. But with humour, you know when it’s warm and when it’s not. Like Tina Fey at the Golden Globes opening: she was tearing Hollywood apart, but they’re all laughing because it’s true.

KM –  What can be considered free speech and what is just offensive? But that’s a whole other debate…

One thought on “Still “Male, pale and stale?””