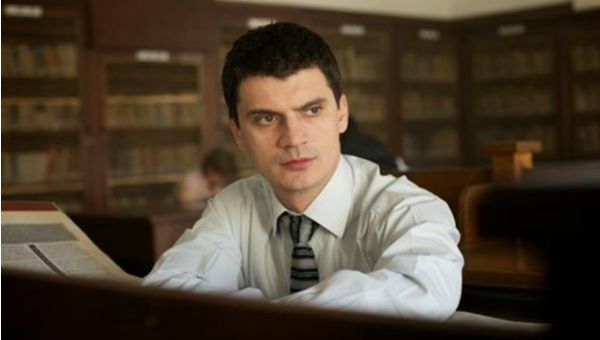 The Organized Crime and Corruption Reporting Project (OCCRP), founded in 2006, is a consortium of investigative centres, media and journalists operating in Eastern Europe, the Caucasus, Central Asia and Central America, and every year they award a prize to the most corrupt person/entity on Earth. In 2013 the lucky recipient was none other than the whole Romanian Parliament, for attempting to pass an amendment to the constitution which would exempt members of the parliament, high and low, from ever being prosecuted for corruption.

This is not directly linked to Romanian director Tudor Giurgiu’s film WHY ME?, but sets the scene in which his 2015 fictionalization of the real case in which young prosecutor Cristian Panait committed suicide (or, as many believe, was murdered) in 2002 after he was put under intense pressure by his superiors to investigate and bring down a fellow prosecutor from a different town after he had prosecuted several individuals involved in a petrol fraud, among them the son of a former prefect of that county.

Despite not being a prolific director – he has made only three feature films since he graduated in 1995 – Giurgiu is probably the most successful and talented Romanian director of the last few years, whose films have not had any connection to the Romanian New Wave (which was covered yearly by our festival). He is one of the very few directors who manage to make genre films which are not only not horrible, but actually good, pleasing audiences and critics alike.

This might give his films an important position in Romania, but on an international level his films have a hard time competing with the output of the richer movie industries he is emulating. Genre clichés are not rare in his films and would probably be scoffed at were they in a Hollywood production. His latest film is no exception, and the scene where the young up-and-coming lawyer goes to a club with his friends to banter and dance with hot girls, the scene where his girlfriend tells him that ever since he took up this case she does not recognize him anymore or the subplot in which he is having an affair are dutifully present.

But as much as his personal life is fictionalized, his professional path adheres rather strictly to the real events, exposing not only the complexity and deep-seatedness of Romania’s corruption, but also the actual people who were involved since their filmic representation is thinly veiled. The story of the hotshot going against the broken system might seem familiar, but this time it is real.

This, combined with actor’s underplayed approach of the roles, allowing the audience no quick black and white judgements, gives the movie a slow but steady pace, in which layer after layer of lies is uncovered, forcing us to constantly re-evaluate what we know.

WHY ME screens on 11 September at 6pm at the Arts Picturehouse
httpvh://youtu.be/qq06v2PGKuo