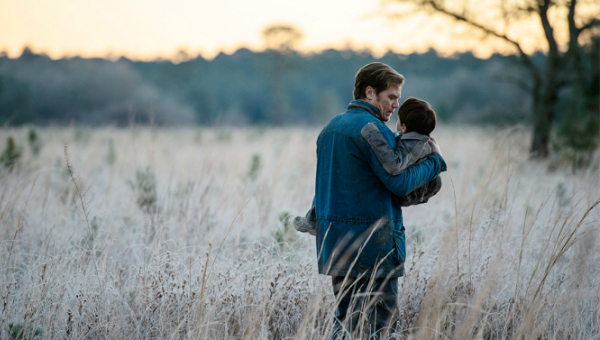 Superficially, Jeff Nichols’ MIDNIGHT SPECIAL leans towards 1980s US children’s adventure fare, such as FLIGHT OF THE NAVIGATOR or D.A.R.Y.L., with a chase plot centred around an innocent child who has superhuman abilities. Here, eight-year old Alton has powers which allow him to intercept communications from radio stations and satellites. He can also communicate via torrents of light which stream from his eyes during febrile fits. He’s acutely photosensitive, so when he and his father Roy run away from the religious cult settlement which has been sheltering them, Alton is swaddled in a sheet, wearing swimming goggles and pile-driver grade ear protectors.

This kind of science fiction story harks back to tales of the fey, changelings, or angels leading children astray in the woods. In the 80s, Cold War tensions led to a preoccupation with inhuman weapons of mass destruction. Whoever could control those forces might win the war. These days, the emphasis has shifted to control of encryption, as the recent spat between the FBI and Apple demonstrated, playing out over an iPhone hacking dispute. This is harder to sell visually than the tension of playing noughts and crosses, or Global Thermonuclear War with Matthew Broderick. Just watch MERCURY RISING for the Bruce Willis take. But, given the reprisals Edwards Snowden, Julian Assange and others have received for their whistleblowing, the government response in these old Reaganite kids’ films doesn’t seem all that far fetched. It’s just that depicting that scenario is much harder without the spectre of mutually assured destruction.

The trappings of the Southern Gothic style are more prevalent in Nichols’ other films, but the starting premise of a Branch Davidian-style religious cult taking scripture from an otherworldly child fits. So too does Nichols’ ongoing fascination with obsessed characters: such as the feuding families in SHOTGUN STORIES, or the delusional murderer in MUD. MIDNIGHT SPECIAL has Michael Shannon back in the mould as a father trying to do right by his son, despite all the consequences. This is not new territory for him, following his tortured performances in TAKE SHELTER and REVOLUTIONARY ROAD. True to form, he gazes downwards from beneath those caterpillar eyebrows, and hobbles along with the pained expression of a man continually catching his hemorrhoids on the hem of his hessian underpants.

Not so much typecast as trapped in a trope, Adam Driver appears as the gawky government scientist who tracks down and engages with the alien. Thankfully he hasn’t caught the Jeff Goldblum jitters from INDEPENDENCE DAY: he is often seen gazing wistfully at a whiteboard covered with coordinates, his head half-cocked as though puzzling over a particularly fiendish Sudoku.

The surprise amidst the stereotypes is Joel Edgerton as Lucas, the state trooper dragged into the tragedy. Lucas helps Roy transport his son across country, almost unreservedly helping and offering counterpoint and alternative plans where necessary. Early on in the film he conveys the pain of what he is sacrificing to help them, when he is forced to shoot a cop who recognises their car. Neither he nor we ever find out what happens to that downed police officer, and the film is richer for it, as Lucas chides Roy for forcing his hand. As sidekicks go, Edgerton makes a real go of it.

The buildings of the “others” seen at the finale resemble how the architect Norman Foster might have interpreted arcologies in the Will Wright game. Throw in a dash of the visual Space Age vim of TOMORROWLAND, and you have a surprisingly optimistic outcome for a scenario signalling mass suicide. This final flight of visual fancy ties Nichols to Terrence Malick, especially in THE TREE OF LIFE, and for the southern settings and similar casting, notably Sam Shepard. Stylistically, Nichols takes the opposite approach to Gareth Edwards’ MONSTERS, which dressed the alien invasion genre in guerilla documentary style: MIDNIGHT SPECIAL’s characters and setting have a US indie sensibility which is thrust into genre territory. The other director to contrast with Nichols is fellow Arkansas native David Gordon Green, who also swerved from personal indie films to studio pictures, in a similar but more pronounced way, from GEORGE WASHINGTON to PINEAPPLE EXPRESS. To his credit, though, Nichols’ trajectory seems more organic so far. MIDNIGHT SPECIAL is a slightly more grown-up version of the genre source material, more in line with John Carpenter’s STARMAN than Spielberg’s E.T., and it’s certainly a respectable entry in the canon: science fiction thrills with an indie authenticity.

With special thanks to the Ritzy Picturehouse in London