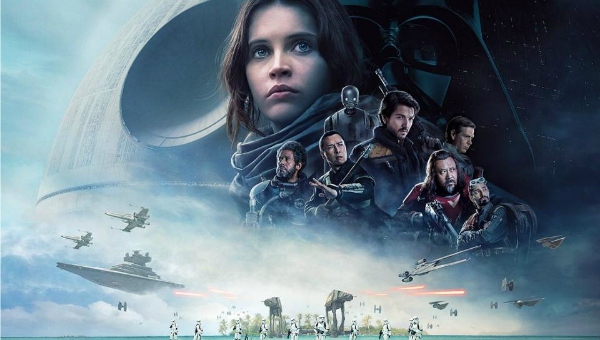 Following the successful revival of the Star Wars franchise with 2015’s The Force Awakens, Gareth Edwards, a relative newbie to the director’s chair, delivers the first of many planned anthology films. Unlike J.J. Abrams’ entry into the saga, however, ROGUE ONE has more in common with SAVING PRIVATE RYAN than A NEW HOPE, and, against odds that would make even the hardiest Rebel blush, manages to deliver an entirely new experience that remains firmly grounded in the galaxy far, far away.

Taking an overdue departure from the escapades of the Skywalker lineage, ROGUE ONE opens with an introduction to the Erso family: humble farmers hiding out on a remote planet, on the run from the grips of the Empire. Of course, with this being Star Wars, the good guys can only hide for so long before a few Imperials come marching up to their front door. In this case, it’s to abduct family patriarch and brilliant scientist, Galen Erso (Mads Mikkelsen), leaving his young daughter, Jyn, to fend for herself.

With such a storied history in the Star Wars film universe, introducing this team of rogues and developing them into characters that audiences will care about, all while forwarding a fairly fast paced and intricate plot, is no mean feat. Thanks to a tight script from screenwriters Chris Weitz and Tony Gilroy (based on a story by John Knoll and Gary Whitta), ROGUE ONE pulls this off with a flourish. As a protagonist, Jyn is like nothing ever seen in a Star Wars film before: she has no sensitivity to the force, and no grand destiny to fulfil. Instead, she is a troubled woman who has had to watch her own back for far too long, leaving her prickly and wary of others. Over the course of the film and thanks in no small part to Felicity Jones’ raw and unrelenting performance, Jyn slowly evolves, learning not only to trust and rely upon others, but more importantly how to have faith in herself, becoming the beating heart of an unlikely rebellion, built on hope.

As the only honest-to-God Rebel when the team first sets out, Cassian Andor is burdened with the responsibility of ensuring the success of the mission, as well as a couple of secret agendas that only he and the high command are clued in on. Diego Luna walks an elegant line with such a complex character; with a grit of his teeth or a narrowing eye, he readily shows the conflict that Cassian feels when his dedication to the cause clashes with his otherwise moral sensibilities. Every Star Wars film has Rebels in it, but never before has the weight of the rebellion been so brutally demonstrated, and Luna captures that contradiction perfectly.

With the film in danger of being too gritty to realistically fit into the saga, it makes perfect sense that Captain Andor would come with his own personal smart-talking droid sidekick. Performing both the motion capture and voice acting for K-2SO, Alan Tudyk threatens to steal every scene he appears in; whether it’s a sardonic greeting during his first appearance, or pan faced irony during the climatic sequences, K-2SO has a quip for any circumstance, and he isn’t afraid to use them. Veering around the potential speedbump of being received as little more than a C-3PO tribute act, he is introduced as a reprogrammed Imperial droid, offering up plenty of opportunity for double agent action as the gang attempts to infiltrate Imperial facilities.

Not content with just one comedic double act, ROGUE ONE also introduces Chirrut Îmwe and Baze Malbus, a pair of hearty warriors who abandoned their post defending an ancient Jedi temple after the Empire occupied their holy city. This provides not only a great bit of backstory for the Jedi religion as a whole, but yet another original channel through which the Empire has broken the spirit of those they oppress. Baze Malbus, disheartened at the fall of the Jedi, has lost his faith in the Force and in spirituality itself, opting instead to approach his mission with pragmatism, searching for something else to believe in. Wen Jiang perfectly portrays Malbus’ weariness, particularly when dealing with his blind, and often troublesome counterpart, Chirrut Îmwe. Although not a Jedi himself, Chirrut retains his faith more than ever, and relies heavily on the Force to protect him, especially during the meticulously choreographed fight scenes that do justice to Donnie Yen’s Kung-Fu background.

While a crucial part of the team, and portrayed excellently by Riz Ahmed, the Imperial defector Bodhi Rook has very little character development, and is used almost exclusively to further the plot, leaving nothing to really invest in when the stakes get high. The same can be said for fairly one-dimensional extremist fighter Saw Gerrera. Forest Whitaker’s portrayal of the wheezing cyborg certainly isn’t lacking for emotional extremes, be it interrogation or reunion, he has some crucial scenes to contend with, but the intensity of the character never wavers, and as such doesn’t really deliver anything of substance. Furthermore, some questionable motivation on Saw’s part in the second act come across as downright uncharacteristic, seemingly written in for the sake of additional drama.

As with any film based around a rag-tag group of morally ambiguous heroes (see 2014’s Guardians of the Galaxy), ROGUE ONE struggles to balance its time economically, and it’s the villain of the piece who suffers as a result. Director Krennic (Ben Mendelsohn in his usual fine form) isn’t the evil dark lord of the Sith who is hell bent on domination, but rather a career orientated middle manager, trying desperately to make a name for himself on the backs of other people’s work. While this is an undeniably interesting approach, the film has Krennic reporting to his superiors throughout, and that’s where things get messy. The trailer for ROGUE ONE already divulged the inclusion of Darth Vader, and while the ultimate Sith is as formidable as ever, his presence is used sparingly and to great effect. It is another, more unexpected inclusion that constantly towers over Krennic, and while Ben Mendelsohn delivers a first-rate performance, he doesn’t quite manage to step out from that shadow.

These Imperial powerhouses aren’t the only nods to fans that Edwards’ slipped into the film: throughout the story there are cheeky winks and references to the original trilogy, the prequels, even to the animated TV show, Star Wars Rebels. These Easter eggs are subtle and unobtrusive for the most part, informing the story rather than guiding it, and allow ROGUE ONE to stand on its own two feet while still paying homage to the source material. When J.J. Abrams tried a similar feat with THE FORCE AWAKENS, many felt that his story echoed the original STAR WARS too much, and failed to do anything original with the saga. Edwards’, however, takes strides away from the classic structure of a Star Wars film: here there is no opening crawl, no mention of Skywalkers, and perhaps most importantly, John Williams’ score is nowhere to be heard. Stepping in to the colossal conductor’s shoes is Michael Giacchino, whose obvious respect for Williams’ work has allowed him to create something that is incredibly unique, yet still feels right at home amongst the original iconic score.

By respecting the origin of these characters but focusing a lot more on the ground-level impact of war, Gareth Edwards has created a bleak, hard-hitting war film, with scenes reminiscent of the trenches of World War 1 or the storming of Normandy beach, that still feel fundamentally like Star Wars. Although it relies on a knowledge of the core films to really appreciate some of its subtler, fan-serving moments, this is the first film to attempt to tell a story that isn’t driven by the epic fight between Jedi and Sith, and the result isn’t just the most ground-breaking Star Wars film since 1977: it’s a beacon of hope for the future of the franchise as a whole.

One thought on “Rogue One: A Star Wars Story”