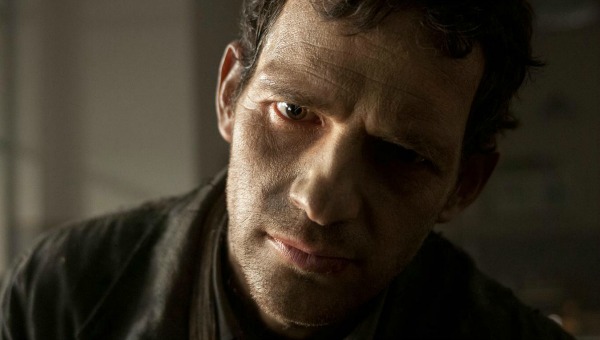 SON OF SAUL is brutal. It chooses to show one man’s shot at redemption amidst the horrors of a concentration camp by showing as little as possible. Almost everything, except for lead actor Géza Röhrig, blurs off to a smudge or juts off frame. Röhrig as Saul fills almost every shot. His large, split nose. Is it broken? His jutting brow casting perpetual shadow upon his not-quite dead eyes. The gulley-like grooves beneath his orbits offering egress for tears that never emerge. His stubble bristling. Best not to think of where all that cut hair might be going.

In a happier context, this could be a companion piece to ZIDANE: A 21ST CENTURY PORTRAIT. Unfortunately, this does for Auschwitz what SAVING PRIVATE RYAN did for Omaha Beach. It topples you into hell. Except that there is no escape from this situation in martial sacrifice, only in moral compromise.

Director László Nemes uses this relentless attention on Saul as his bridgehead: for trespass into the camp; for a window into Saul’s introspection. Saul is a Sonderkommando, or enslaved worker, at a Second World War death camp. He helps the Nazis process the incoming victims for gassing. As the Russian front draws nearer, the brutality in the camp is mounting, and the inmates forward plans for insurrection. Saul, at the expense of all else, fixates on the body of a boy who he says his is son. He wants to find a rabbi to give the boy a proper funeral.

… might there be a reasonable case against making a depiction of genocide so immersive?

Nemes forces the camera to shadow Saul in the third person, holding back mostly behind his shoulder or at his side. When it’s not doing that, it’s looking right at him. Rarely are we without him. We see everything. The trucks arrive, and Saul’s corralling the occupants through the stockade like a volunteer at a music festival. Next, he’s promising them hot drinks after their shower as they undress, and reminding them to remember their hook numbers. Then, he’s wedging the metal doors to the gas chamber shut with his body as the screams mount. Finally, the frame settles on Saul.

Without a doubt, SON OF SAUL is a harrowing ordeal. Nobody should ever forget that this happened, but might there be a reasonable case against making a depiction of genocide so immersive? If a computer game tried to simulate life inside a concentration camp, the roars of opprobrium would be crushing. Nemes’ myopic viewpoint dodges the argument somewhat, by focussing on Saul. Away from fictional depictions of the SCHINDLER’S LIST kind, the stolid documentary approaches of the Claude Lanzmann or Marcel Ophüls variety often seem more suitable to this subject.

Other difficulties also occur. Given the presentation style, or perhaps in part because of it, the film seems to traipse into travelogue at times. Saul as a character has reason to go to the gas chambers, medical laboratories and death pits, as he roots around the camp for the body of the boy, and then in search of a rabbi. Yet it seems unlikely that he would be allowed to, despite the mounting chaos. The other nuance the film lacks is that of the banality of evil, or of seemingly normal people doing their job. None of the guards are shown to be remotely human. Given the heightened, almost carnival atmosphere, and the prisoner-level perspective, this makes sense. Humanity has been put aside for the most part. The film’s focus is on Saul’s attempt to make sense of it.

Nemes worked previously with Bela Tarr, and the comparison is worth making. Tarr sculpts his frames with time. Long oodles of time, in agonisingly long shots. Nemes casts his frames with focus. These may seemingly spare us the horrors of the world Saul inhabits, but we swiftly realise that this is false. Monstrosities keep happening in SON OF SAUL, but the film doesn’t show them properly. In many respects this makes them far worse.

With such close deliberation to Saul’s face, Nemes constantly asks us to consider what he can be thinking and feeling. In this way, Röhrig’s performance sometimes resembles Jonathan Pryce’s at the end of BRAZIL. The Holocaust may be unknowable to all except a dwindling group of survivors, but Nemes gives it one hell of a shot: by marking one human death, he helps us to identify with the multitude.

SON OF SAUL is part of the BFI Oscar season. To mark the prestigious 88th Academy Awards, BFI Southbank will host screenings of all the films in the running from several categories, as part of AND THE OSCAR® GOES TO… season.

Click here  for further information on bookings and the event schedule.

One thought on “Son of Saul”