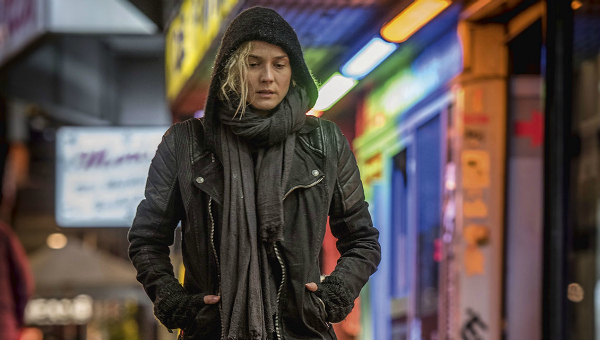 Amid a seemingly endless succession of terrorist attacks across the globe, director Fatih Akin delivers a thoughtful, unblinking look at the devastation that follows such events, and the vicious cycle of violence leading to violence leading to violence. Instead of lazily painting the perpetrator as a radical Islamist with a grudge against the west, IN THE FADE actually subverts that cliché and reminds audiences that there are many more hateful groups in the world than that small sect on which the media like to focus, choosing to delve deep into Germany’s own history of extremist behaviour.

The film opens on a shaky, hand-held home video showing the emerging romance between Katja (Diane Kruger, in a performance that netted her the Best Actress award at the 70th annual Cannes Film Festival) and reformed ex drug dealer Nuri (Numan Acar), from their prison wedding to the arrival of their son Rocco (Rafael Santana). Their nuclear family bliss is cut short, however, when an unknown terrorist detonates a nail bomb outside Nuri’s office, killing both him and Rocco. As the investigation begins, and her husband’s Turkish heritage and drug dealing past are brought into question, Katja is forced to contend with the sleazy, uncooperative justice system, all while trying to get a grip on the loss of her family.

Kruger earns her best actress award, with a harrowing depiction of the tortures faced by those who the attacks leave behind.

As a revenge tale told in separate chapters, IN THE FADE (Aus Dem Nichts in its original German) meshes three visually and textually distinct genres into one cohesive narrative. The first part follows the hard-hitting drama following the explosion, with plenty of family politics and some excellent chemistry between Katja and her heavily-pregnant sister, Steffi (Jessica McIntyre). It’s here that Kruger earns her Best Actress award, as plenty of screen time is dedicated to Katja’s grief; allowing for a harrowing depiction of the tortures faced by those who are left to pick up the pieces in the aftermath of the attacks.

The second chapter switches to the courtroom, as the supposed perpetrators of the attack are taken before judge and jury. Although her uniquely interesting position as co-plaintiff and witness for the prosecution offers plenty of opportunity for Kruger to expose some of her character’s vulnerabilities, it’s the lawyers who really stand out in this scene. Denis Moschitto plays Katja and Nuri’s long time friend and legal counsel, Danilo, swinging between a soft, tentative shoulder to cry on, and a passionate, mic-dropping law wizard at a moment’s notice. Opposite him is the public defence attorney, Haberbeck (Johannes Krisch, dripping with smugness and pomposity), who shamelessly attacks the characters of both Katja and her late husband, using any legal trick at his disposal to win the case – regardless of morality.

After the intense, almost voyeuristic depiction of Katja’s mourning process, and the slick, incredibly well-written courtroom drama of the first two chapters, the third ends up feeling a little lacklustre, if only for its absence of the elements that made the others so engaging. Shifting gears again, this final chapter sees Katja embarking on a globe-trotting quest to confront a character whose deceitful testimony complicated the trial. As she goes full espionage to track and hunt her quarry, the film morphs into more of a revenge thriller, with less focus on emotion and more on tense close-calls and nail-biting action. Although what is present in the third segment is done well enough, and it all builds to a satisfying, thought-provoking conclusion, most scenes see Katja either on her own, or dealing with strangers. Given the strong relationships that were developed with Steffi and Danilo over the first two acts, it seems a shame to lose such captivating dynamics, and the final hour feels lacking in emotional depth as a result.

The film draws some very interesting parallels about radicalisation that couldn’t be more relevant in today’s society.

It may be viewed by some as an odd move to produce a story in 2017 about the ghastly after-effects of a terrorist attack, and not use the opportunity to make some form of obvious, soap-box statement denouncing ISIS; but this is a decidedly short-sighted examination of a film with much deeper symbolism running through its veins. Extremism has surfaced throughout history in many forms, and Akin’s decision to focus on something more personal to Germany’s history – based on research into attacks upon minorities between 2000 and 2007 – only serves to enforce this point. Political ideology aside, the basic structure shown here of a hate-group attacking a specific target based on their colour and/or creed, and the devastation that follows, transcends individual news stories; and draws some very interesting parallels about radicalisation that couldn’t be more relevant in today’s society.

Screened, as it was, in the same week as the Manchester attack, and only a few miles down the coast from the Nice attack, this is about as red-hot topical as a film can get without shifting into documentary territory. As much as the details of the attack are thoughtfully and sensitively written, it’s to the film’s credit that it doesn’t waste much screen time focusing on the tragedy, choosing instead to study the impact on the victims’ families. Spanning multiple genres as it follows one woman’s attempts to come to terms with her loss, IN THE FADE stumbles only briefly before charging through to a gut-wrenching finale with a whole lot more heart than hate.