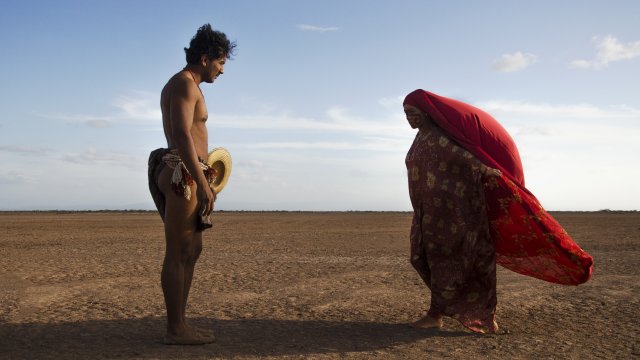 The Cambridge Film Festival took an epic turn with its first screening of BIRDS OF PASSAGE. Directors Cristina Gallego and Ciro Guerra have stunned guests at Cannes’ 50th Director’s Fortnight event earlier this year with their latest picture. Their effect on the Cambridge public was equally as grand.

BIRDS OF PASSAGE tells the story of the rise and fall of a Wayuu family. Presented as a folk tale, the film is divided into five songs, representing true events that unfolded in the Guajira Peninsula, in Colombia, from the 1960s to the end of the 1970s. It is a story of belief, violence and, ultimately, death. Offering a gripping picture and featuring an incredible cast which delivers truthful and poignant interpretations. Actors Carmina Martínez (Úrsula) and José Acosta (Rapayet) deliver performances that stand out. On top of that, the film’s aesthetic choices and stunning cinematography perfectly fall in line with the film’s complex storyline.

The narrative transposes the typical mob film, so popularised in the 1970s by the New Hollywood movement, and gives it a lyrical feature thanks to the heavy presence of tradition and superstition. Each character represents an entity: for example, Úrsula, the matriarch, represents traditional values. It comes with no surprise that her life is spared multiple times throughout the film, her attackers deeming her death to be worthless. As a matter of fact, history has often shown us that the way to eradicate tradition is not by destroying its icons and representations, but by slowly letting it fade into oblivion.

The film discusses the theme of tradition and its importance within a modern world that is constantly evolving and changing.