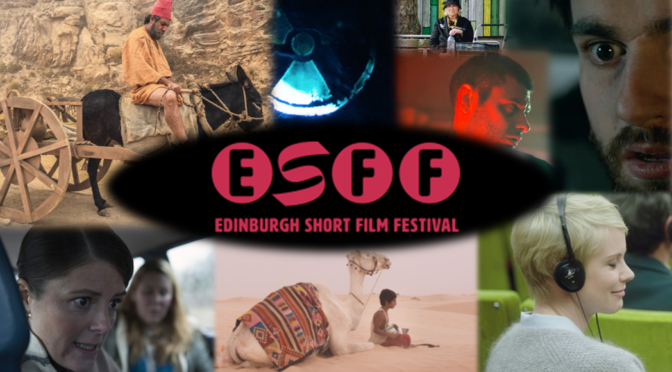 One of the programs in the second weekend of the 2018 Edinburgh Short Film Festival, Friend or Foe on November 4th is a strong collection of award-winning films. Focusing on the things and people that attack us or support us, and the grey areas in between, Friend or Foe proves adept at nixing assumptions and blending a varied set of tones and genres.

CLOSE TO THE BONE (nominated for Best Scottish Short at the 2018 festival), Kevin Pickering’s body horror packs a lot of highly effective squeamishness into this portrait of a man with a mentally damaging eating disorder. The lengths gone to to make food look disgusting – crawling with maggots, grotesque pre-butchered animals, uncomfortable close ups of chewing – are impressive and superbly effective, placing us right alongside Roy’s experience as well as any film reasonably could. Drenched in red light, some of the more abstract scenes involving Roy’s father veer a little towards the opaque in terms of character sketching. However, contrasted with the saturated, happier shots of childhood the contrast developed by Pickering is an arresting sight.

GYPSY’S KISS, directed by Paul Murphy, is an excellent exercise in subverting expectations featuring a excellent central performance from Gemma Jones. Playing a put-upon-seeming widow, we are introduced to Judith in a dreary seeming provincial cityscape, where a young woman is casually harassed and young men roam with little to do. It becomes apparent she is dealing with her late husband’s death, people reacting to her being out and about with surprise and more than a few laced with casual misogyny. Come the conclusion, however, Samuel Jefferson’s script effectively turns our perception on its head for a more positive – if not necessarily uplifting – finale.

Lebanese comedy AL HMAR (THE DONKEY) shows some excellent comic writing and timing, telling the tale of a man conned into believing his mistreated donkey has turned into a man. Mohamad Akil is given more than a few great lines (“…a disaster with two ears and a tail!”) as Abdeshmun, and shows some excellent comedic timing. Director Tariq Keblaoui also shows plenty of comic flair with his framing and camerawork, humiliating the hapless Abdeshmun from behind the camera as well as with the script, emphasising his shock with jump zoom and always placing the frame for maximum visual irony.

Animated short RADIOACTIVE ostensibly shows a viral outbreak spread by radioactive bugs, and the animation presented is engrossing and skilled. It would be lying to say the narrative advertised necessarily comes through, either by visual implication or explicitly, but the animation combines with some excellent contrast and colour work to showcase the skills of Pamela Gray and all involved.

LOST AND FOUND opens with a young man attempting to steal a car, only to be rudely surprised with its contents; the excellent premise is sold effectively by the lead actors (Greg Sives and Erin Christie). This sits alongside excellent work from director André Franco in constructing the scene around them to emphasise the dichotomy the thief finds himself in. If anything, this short perhaps feels a bit…well, short. The elements feel like they were coming together, and is testament to quality within that brevity that there is a feeling of an excellent short story that gets truncated.

Another anchor point for the evening’s program is OVUM (already a winner of awards at Rhode Island International Film Festival and Los Angeles Short Film Festival). Without dialogue, a lone fisherman (Jayson Gladstone) finds a giant egg-like object on the beach. Intrigued, he takes it back to his home, where it proceeds to be the source of all sorts of strange goings on. Gladstone is impressive, carrying the whole film himself, moving through various stages of intrigue, fear and mourning in the magnificent cinematography, the lighting effectively moving our own moods with that of our protagonist. Filmed in a very wide aspect ratio, the feeling of space is initially wonderful and then superbly undermined by the tight framing of the interior scenes by Luciano Blotta. The film is perhaps a little on the nose with Atargatis nods and imagery, but OVUM demonstrates aptly that an understanding can be effectively created with sparse time and dialogue.

BORN WRONG chronicles the long taxi journey shared between two sisters, the more buttoned up Iiris (Liisa Kuoppamäki) and the more content Meri (Marika Parkkomäki). A ‘bottle episode’ concept for most the 19 minute running time, the claustrophobia is emphasised by the tight aspect ratio and close ups employed by director Kaisa El Ramly. With that in mind, despite the script gradually accelerating its illustration of the feud from passive aggressive to actively aggressive, much falls upon Kuoppamäki’s and Parkkomäki’s facial expressions and body language, and they carry it admirably. As the film closes, it pans out to a much wider angle: a visual representation of the emotional distance displayed in that taxi cab.

“Zariâb’s skill in filming the camel race [in THE CAMEL BOY] cannot be understated.”

THE CAMEL BOY, depicting a young boy forced into camel racing, is a heartbreaking but beautiful short from director Chabname Zariâb. Tight close-ups frame the sadness of the lead child, and Zariâb’s skill in filming the camel race itself cannot be understated.