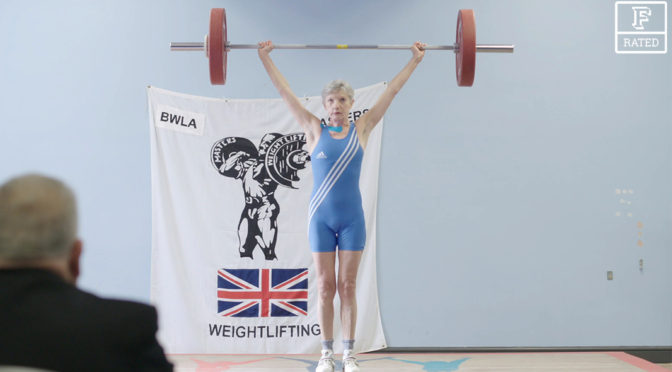 Gwedolyn Leick is in her mid-sixties, weighs just under fifty-two kilograms, and is a European and world weightlifting champion. An anthropologist and writer, she views her life as an adventure. Ruth Kaaserer’s documentary, GWENDOLYN, follows her as she prepares for the European Weightlifting Championship in Azerbaijan, and details the many absorbing components of her extraordinary life.

There is something quite remarkable about GWENDOLYN, both in terms of Kaaserer’s documentary and its eponymous protagonist. Gwendolyn has recently battled salivary gland cancer- the film opens with a bandage being removed, demonstrating that she still faces multiple physical battles. She seems atypical to what you might expect of a weightlifter, in part due to her life story and in part due to her physical appearance. However, When she steps towards the barbell, it is clear that she has great strength, both physically and mentally.

Kaaserer has a clear interest in portraying women who take on male-dominated sports. Her first film, 2014’s TOUGH COOKIES, depicted three young American women boxers. In GWENDOLYN, her camera focuses on the concentrated, resolute movements of this elderly, female weightlifter, often surrounded by her younger male counterparts. Gwendolyn makes weightlifting look easy, despite her frailer figure. She is, nevertheless, an understated figure, and the film effortlessly matches her modesty in its portrayal.

The documentary makes an effort to show the male figures surrounding Gwendolyn in her day-to-day life. There is her supportive Ivorian partner Charlie, her son Joseph, and trainer Pat. These are her most important relationships, and the documentary is not afraid to show intimate moments between them. We are allowed a rather personal gaze at Gwendolyn, her career and her relationships, though the film is very careful not to be invasive. The storytelling deploys both intimacy and distance, and is effective in its usage.

Kaaserer’s GWENDOLYN is an inspiring documentary about a fascinating individual, who sets her own limits as to what she can achieve. It does not shy away from her hardships, and is unafraid to show the battles that she has faced. It skillfully demonstrates that no matter life’s challenges, a certain resolve can make great achievements possible.

GWENDOLYN is showing as part of the Cambridge Film Festival at 12:45 on Tuesday 30th October, and again at 21:45 on Wednesday 31st October. Both screenings are taking place at the Arts Picturehouse, and Gwendolyn Leick will be attending for a Q+A after the screenings.