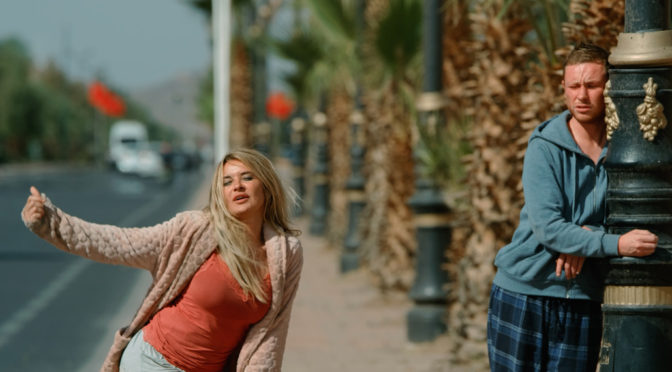 There’s no denying this raucous road movie has its moments, with effective comic interplay between the slatternly Olga (Kierston Wareing) and her equally feckless and foul-mouthed son Ron (Tommy French, both of them EastEnders alumni). During one of the film’s many slap-fights while Olga and Ron are on a late-night hunt for cheese, the car skids off the road and into in a docklands container, which dumps them in Morocco, still in their pyjamas with only a bag of jelly babies for sustenance.

From there the couple have to make their way home, using a mixture of theft and subterfuge, with the help but more often hindrance of petty British embassy officials, local taxi drivers and drug smugglers. Along the way Olga reveals that Ron was the result of a one-night stand after a hen night in Calais and the endless bickering resolves itself into Ron’s hunt for his father as they cross from Spain into France.

After a ham-fisted attempt in the vein of DUMB AND DUMBER to win money via a singing contest, Ron hooks up with the compliant winner Paloma (Aida Folch) who seems suspiciously eager to supply passports and even to marry Ron to help him cross the border. The plan backfires spectacularly but the consequences eventually help the onward journey: this is when I LOVE MY MUM works best, as the own-worst-enemy negatives conspire to produce a positive and sometimes hilarious outcome.

Unfortunately for that to work successfully you need to be rooting for the characters throughout, but here the relentless xenophobia just becomes tiresome. Though the action is always well orchestrated, it includes a dubious set-piece involving a hapless boatload of refugees bound for Spain; anything for a laugh is too often the tone, likely to satisfy only a hard-core Brexiteer.

That said, Catalan director Alberto Sciamma brings out the best in his magisterial native landscapes, where (as the hymn almost says) ‘Every prospect pleases, and only Olga and Ron are vile’.