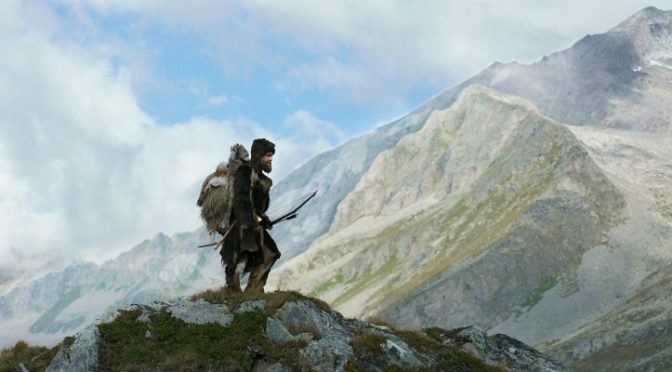 A revenge movie with its precious little dialogue in an ancient language, ICEMAN is a visually stunning film that illustrates very well the old adage “a picture is worth a thousand words”. The story probably only needs half of that hypothetical picture; however, the overall tale is engaging and dramatic in a way entirely beyond words.

The plot revolves around Jurgen Vogel’s Kelab, seeing his home ablaze in the distance while on a hunting trip. Upon reaching his home, he finds his entire family and community raped and murdered at the hands of rival Neolithic settlers in the Ötzal Alps area. Devastated, he sets out on a long and gruelling pursuit for vengeance.

The film opens by boldly claiming that “no translation is required” in order to follow the events. This proves to be correct, and subtitles would have in fact detracted from the final cut. Felix Randau has gone to great lengths to make the scale and beauty of the landscape apparent and the action visceral enough that dialogue for a very simple plot would simply be a distraction.

The heavy work also falls to the actors, therefore, and primarily to Vogel. Apart from a keenness for screaming at the sky, his thoughts and actions are all superbly realised. This is achieved, furthermore, without imprinting a modern sense of tragedy upon his plight any more than is necessary to relate to his anguish.

“…subtitles would have in fact detracted from the final cut. Felix Randau has gone to great lengths to make the scale and beauty of the landscape apparent…”

None of this is to say ICEMAN is free from the odd piece of yellow snow amongst the ice sculptures. A precious artefact stolen from Kelab, which he aims to recover, seems destined for much of the film to be a wooden version of the PULP FICTION briefcase, until a late thematically communicative reveal. The plot leans heavily on filmic tropes of the ages – it isn’t that far removed from 1980s Schwarzenegger vehicle COMMANDO (though with fewer puns), THE REVENANT (with fewer bears), or BRAVEHEART (with less tartan and no crap accents, not that we’re experts in Rhaetian accents or anything). As faithful as the production team appear to have been to the period (the film itself being inspired by the find of Ötzi in 1991), the main stylistic choice for portraying Neolithic people seems to be mud on the face and backcombed hair. Combined with the fairly consistent costume style and difficulty assigning names, these choices perhaps rob ICEMAN of some emotional depth.

“[…there is] the odd piece of yellow snow amongst the ice sculptures […], but we can be captivated by the excellent visuals and technical execution of it all, words be damned”

Having said all that, the simplicity of the narrative and plot devices allows the film to breathe (and deeply) in all other areas. The camera frequently tracks action over a long continuous shot, and one sequence that sweeps up a mountainside with a vertigo-inducing intensity is particularly impressive. The sound design, free from the need for comprehensible voices, comes to life in the cracking ice, bodily bruising and howling natural phenomena the characters endure.

Although, come the conclusion, the camera framing delivers some heavy-handed symbolism to go with the thematic sledgehammer mentioned above, the same visual freedom is what has afforded the film’s best moments prior to this. There is also a clarity and variety to Jakub Bejnarowicz’s cinematography which elevates the ancient setting beyond the stereotypes of cavemen in loincloths. A lush set of greens and blues, transitioning through orange infernos into harsh piercing whites, consigns brown, grim and dusty caveman stereotypes to the Neolithic bone pile.

The underlying simplicity of ICEMAN is both a blessing and a hindrance. Felix Randau, however, does some stunning work in bringing the setting of the film to life. We may not understand the language, but we can feel every blow and chill and be captivated by the excellent visuals and technical execution of it all, words be damned.

At the time of publication ICEMAN has screening at Edinburgh Filmhouse, Glasgow Film Theatre, Curzon Bloomsbury and is available through Curzon Home Cinema.