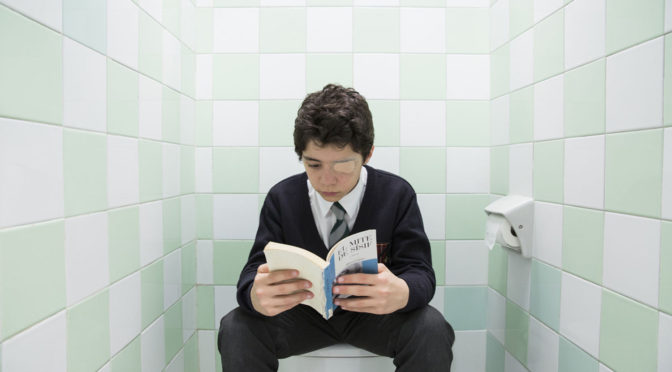 Francesc, an unhappy 13 year-old boy living in Barcelona, is inadvertently introduced to the works of Albert Camus, whose existentialist ideas he finds unconvincing but intriguing. Arming himself with a new French name, Jean-François, the boy sets out for Paris to give the writer a piece of his mind — unaware that Camus has been dead for more than 50 years. Met with obstacles almost immediately and with no discernible plan, Jean-François falls in with a rebellious teenager, Lluna, who has her own reasons for wanting to visit France.

The film that follows is, as Lluna later describes it, an ‘adventure’, but she and Francesc/Jean-François are not the stuff of heroes. The characters’ occasional displays of initiative and cunning are more than matched by their aimlessness, self-destructive impulses and dishonesty. For much of the film they don’t even seem to like each other very much. The film reveals no acts of courage, and is all the better for it.

Though the film deals with dark themes like bullying, heartbreak and thoughts of suicide, the director Sergi Portabella has no interest in immersing the viewer in inarticulate but deeply-felt teenage angst. There is a literal distance to his approach: he likes to shoot from far back, showing people or, more often, cars moving horizontally across the entire screen (the film is, after all, a road movie), accompanied by a soundtrack of stately but spirited Baroque music. This distancing effect is compounded by set of laconic intertitles. The simple but elegant and precise style of the shots allows Portabella to take advantage of a number of effective repetitions throughout the film, both within the story and inside Francesc’s elliptical dream-life.

Though not actively funny — indeed, in view of the subject matter, often rather melancholy — the film has a certain wry sensibility. The director is lucky to have as his protagonist the young actor Max Megías, whose face, so often called on to show a combination of inscrutability and mystification, is nonetheless so expressive.

One thought on “Jean-François i el sentit de la vida”