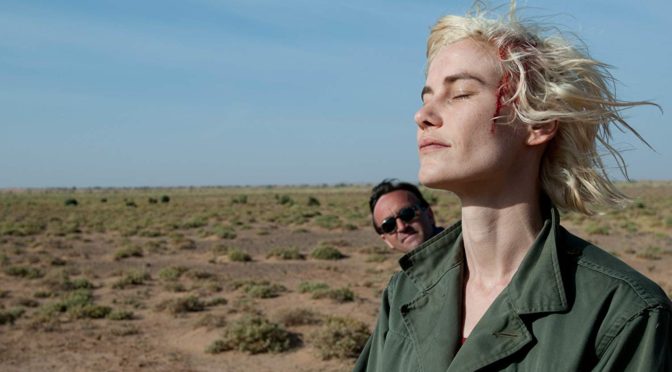 It’s not hard to see why Dimitri de Clercq’s first solo feature as a director (he previously shared co-credit with Alain Robbe-Grillet on THE BLUE VILLA in 1995) has become a film festival favourite, recently winning Best Picture at Bogota, Houston and Orlando and picking up nominations for its cinematography, score and two lead actors (Delfine Bafort and Svetozar Cvetkovic). A psychological thriller which increasingly grips and unsettles, it also benefits from gorgeous Moroccan landscapes lovingly shot, spectacular architecture and copious (though rarely gratuitous) nudity.

Emerging from a catastrophic car crash in which her driving companion has been killed, the traumatised Dafne (Bafort) crawls away from the wreck, through the lethal desert in the heat of the day and is near death when rescued by Jake (Cvetkovic), a lonely architect who bundles her into his jeep and takes her back to his place (in reality the exotic ‘Fobe House’ outside Marrakech, designed by Guilhem Eustache and owned by the director). Once there and in his care Jake tries to convince the amnesiac Dafne that her name is actually Katya or ‘Kitty’ and that she’s his wife.

From now on in an effective slow-burn the tension mounts as Dafne tries to piece her memory together while Jake keeps her from meeting any visitors likely to give the game away. As she searches the house for clues (Jake reports that all their personal mementoes like wedding pictures were lost in a fire), he is out trying to persuade potential clients to take a chance on his wacky designs. Gradually as the couple visit the African coast and recreate their supposed honeymoon among Roman ruins, Dafne/Kitty succumbs…but as cracks symbolically appear in the swimming pool, so Jake’s elaborate subterfuge starts to crumble.

YOU GO TO MY HEAD’s denouement is not unexpected but not predictable either and it’s a measure of de Clercq’s control of his story and the actors’ conviction (they’re on screen together for most of the running time) that nagging real-life questions (such as where did all Kitty’s clothes come from and how come they’re such a good fit?) are overcome by the dreamy mystery of the whole venture.