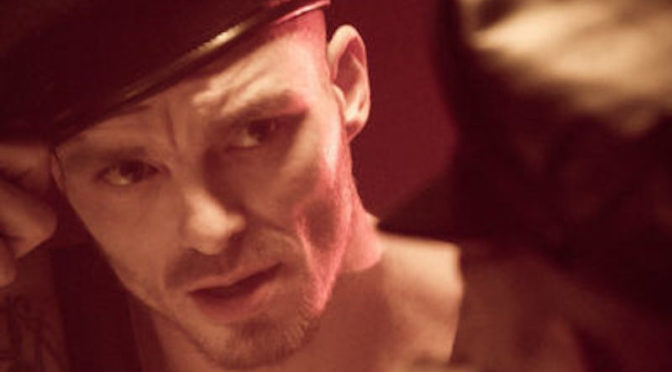 Pornography is becoming increasingly more mainstream and widely available. On a new open platform, with professionals and amateurs, is it open to formal critique? SCOTCH EGG (Bruce LaBruce) and SMOKE GETS IN YOUR EYES (Dylan Meade) are two pornography films which definitely open themselves to formal critique due to their chosen style and performers.

These two films – screening together at SQIFF 2018 – are complete opposites. SCOTCH EGG is highly stylised, professionally made and scripted, and plays around with gender and sexuality. SMOKE GETS IN YOUR EYES is a more intimate piece, has an homemade feel, and is created by the performer, Dylan Meade. SCOTCH EGG has a parody feel to it and breaks the boundary of reality and fantasy. The two performers are AJ Alexander and Candy Flip. Candy Flip plays the role of a straight woman who wants to sleep with a gay man, and successfully does (AJ).

Throughout the film, Candy Flip doesn’t speak and is referred to with male pronouns. At first, it is unclear as to why AJ is referring to Candy as a man, however, this is later cleared up during scenes of Candy and AJ having sex. Candy does not have a penis but there are shots of them both stimulating the idea of a penis being there. It is an interesting idea executed well, particularly in the final moments of the sex scene.

There are elements of the film that are problematic. For example, having Candy virtually silent throughout the 19 minutes running time does play to the idea of her being there to be seen not heard which doesn’t bring an empowering edge to the film. There is also a derogatory comment made about trans men which was unnecessary and should have been left out of the script. SCOTCH EGG is an experimental film and definitely poses many questions about pornography and representation.

SMOKE GETS IN YOUR EYES was a completely different experience. There are scenes of sex intertwined with moments of Dylan getting ready, exercising, looking at himself among others . The homemade style of the film makes it very intimate and even though the scenes can be graphic you do not feel like Dylan or his partner are being exploited. They have chosen how their bodies are being represented and, therefore, how the viewer sees them. The film feels more like an insight into Dylan’s mind instead of explicitly about sexual pleasure. As a pornography film, it achieves the goal of being sexual but in a way that feels closer to reality and Dylan manages to create a relationship with the viewer. The lack of highly choreographed sex scenes and script reveal a different branch of pornography that is gaining popularity, perhaps due to the opportunity to self-represent and take any demeaning elements out of the films. The two films above set up Scotch Porn to be an interesting event that will be a goldmine for heated discussion.

Catch highlights of the SQIFF 2018 in the preview mag.