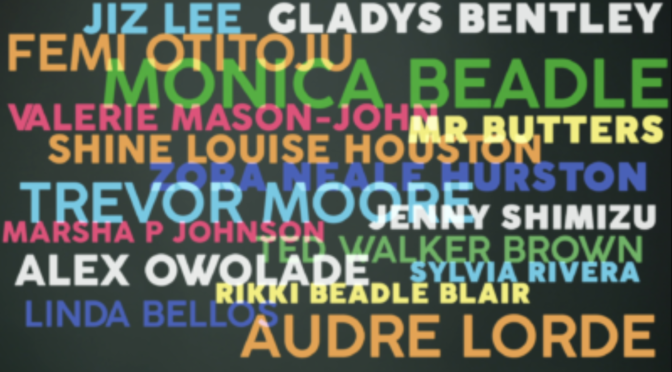 Merry SQIFFmas! The Scottish Queer International Film Festival, now in its fourth year, is back, with a whole host of LGBTQ+ films and events, including the Opening Night Shorts at Glasgow Film Theatre. In a bid to make the festival more inclusive towards deaf people, a sign language interpreter was present, all the films were subtitled, and instead of clapping audience members were encouraged to show ‘jazz hands’, the sign language equivalent of clapping. Helen Wright, the festival’s coordinator and co-founder, said some words at the beginning, thanking everyone who made SQIFF possible.

The first of seven short films, ROUND ONE, told the story of Nicola Stevens, the first openly gay woman to play professional football in Australia. Compared to all the media attention men’s football gets, women’s football is still a highly marginalised sport, so ROUND ONE shines a light on an important topic. Director Ella Sowinska took an unusual approach, however, by not having any spoken dialogue, only subtitles. Instead, the only sounds are Stevens’ heavy breathing and footsteps as she trains in a stadium. If the intention of this was to emphasise the physicality of the sport, it succeeds, but it also results in a disconnect between the audience and the narrative being told, since without hearing Stevens’ voice we are unable to feel like we truly know her.

THERE YOU ARE took a similar approach: the film’s queer protagonist and her girlfriend never speak, although the film’s non-queer characters do speak. Director Lisa Donato is perhaps implying thereby that even in 2018 queer voices remain silenced in a largely heterosexual and cis world. Still, even if they never verbally speak, the looks and gestures of Jessica (played by Jen Richards, who was also the writer) and her girlfriend (played by Alexandra Anderson) say far more than words ever could, and there is a sense of real love and connection between them. Good use is also made of music, so that the film never feels dull. Jessica is a trans woman who, in a Viola-esque twist, is obliged to dress like a boy in order to say goodbye to her dying grandmother. The film destabilises traditional notions of identity by revealing the performativity of gender, whilst also drawing attention to the prejudice that trans people still have to endure, even from their own family.

Bell Zhong’s BLOOMING NIGHT, meanwhile, provided a fascinating perspective into queerness in contemporary China. A lonely man in Shanghai is mesmerised by the red high heels of a person he sees in the street, and he follows them all the way to a secret gay club. The film is shot beautifully, although the theme of a man stalking a trans woman is slightly creepy, even if it does have a sweet pay-off.

The evening’s fourth film, MEDULLA OBLONGATA, stole the show. In this film from New Zealand, by Brazilian director Roberto Nascimento, drag queen extraordinaire Medulla Oblongata – formerly known as Abraham Naim – recounts their escape from homophobic persecution in the Maldives and their move to New Zealand as a refugee. Skilful use is made of graphics and costume, and humour is used throughout in a way that is both tasteful and funny, whilst also drawing attention to important topics such as the persecution of LGBTQ+ people in strictly Muslim nations. Like THERE YOU ARE, but in even starker terms, MEDULLA OBLONGATA reveals that gender and sexuality do not have to be fixed, but rather can be fluid, free and fun.

CRASHING WAVES, directed by Emma Gilbertson, was next in the line-up. In this stunningly choreographed three-minute ballet, two men dance in the concrete jungle of a council estate, their mutual attraction crippled by their own insecurities and the prying homophobia of their community. The performances are beautiful, as is the music.

Akira Kamiki’s TOP 10 PLACE TO VISIT IN SÃO PAULO moved the scene to Brazil, where two photographers – one a Spanish speaker, the other speaking Portuguese – bond and explore the city. The story and the performances are touching, making this a sweet and romantic film.

Finally, VISIBLE, a twenty-minute documentary by transgender filmmaker Campbell X, drew together the stories of queer, transgender and intersex people of colour (QTIPOC). Consisting mainly of interviews and archive footage, VISIBLE is both gripping and informative, drawing attention to all the narratives that have been marginalised and ignored by mainstream histories. In a Q&A after the film, Campbell X emphasised that VISIBLE remains a work in progress, the hope being that it can be expanded in the future so as to be less London-centric. They also spoke about the importance of interacting with people in real life, not just via social media.