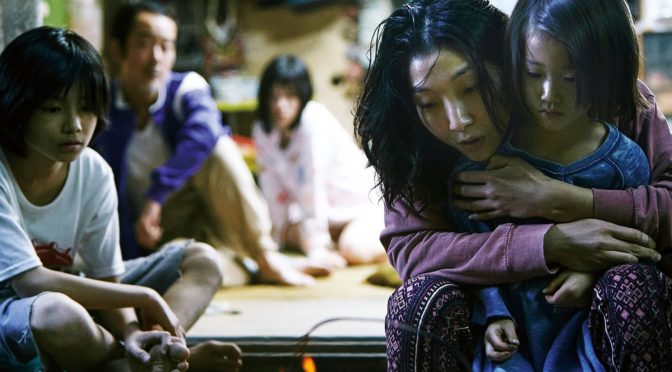 Rarely can a packed Arts Picturehouse audience have been as totally engrossed in a movie as during the screening of Hirokazu Kore-eda’s SHOPLIFTERS (this year’s Palme D’Or winner at Cannes). Unfolding at its own deliberate pace over two hours, the story of the Fagin-like Osamu Shibata (Lily Franky) and his dysfunctional family scraping a living in grotesquely dishevelled accommodation in Tokyo gradually builds into a compellingly detailed portrait of a supposedly affluent society’s grim underbelly.

Grim but at the same time comic as Osamu and his son Shota set about the weekly shop, filling pockets and bags unobserved by staff via a complicated system of hand signals and misdirection, their philosophy being ‘whatever’s in a store doesn’t belong to anyone yet’. On their booty-laden way home, Osamu and Shota discover young Yuri (Miyu Sasaki), left alone on a balcony as her parents argue indoors. Regarding Yuri as abandoned, Osamu takes her home too and Yuri (now renamed Lin) promptly becomes one of the family – it can’t be a kidnap, they reassure one another, as no ransom has been demanded – and anyway the burn marks on Yuri’s arms indicate abuse. Soon the girl is being taught the tricks of the trade by Shota, moving into the Artful Dodger role.

Tricks of another sort are practised by his half-sister Aki working in a downtown peep show, while Grandma (Kirin Kik) supplements the family income by paying visits to her dead husband’s new family and being given money to go away. Meanwhile the Shibatas survive like foraging animals, adjusting to the seasonal extremes of heat, torrential rain and snow in the unlikely comfort of their burrow, in the shadow of Tokyo’s endless building construction.

Retribution from the smart-suited authorities in their sleek offices is never far away one senses but when it comes (triggered by Shota’s reluctance to drag Yuri down into the underworld) the ramifications reveal deep, disquieting and symbolic layers in this unconventional Japanese nuclear family. Yet not for a moment is audience sympathy for any of the characters on the screen forfeited: another mark of Kore-eda’s magnificent (and beautifully acted and filmed) achievement.

One thought on “Shoplifters”