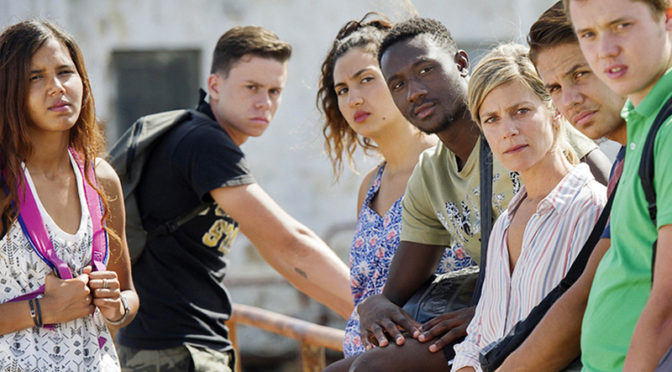 Anyone who’s run a residential writing course will relate how, more often than might be expected, one member of the group has gone (sometimes violently) rogue, due either to inability to take criticism of their creative efforts, or from a chip on their shoulder which was already in place when they arrived.

THE WORKSHOP turns out to be no exception, though since the team of would-be writers has been assembled by Laurent Cantet, whose THE CLASS ten years ago memorably laid bare the shortcomings of the French educational system, compassion for his young characters is never far from the surface – hard though they may be to stomach for some of the time.

Certainly novelist Olivia Dejazet (Marina Fois) finds it a struggle. She’s been sent from Paris to try and inspire a disparate bunch of kids in the town of La Ciotat on the Mediterranean coast. This class is also a French racial mix: black, white, Algerian, Muslim – some eager to help with Olivia’s plan to come up with a thriller, others just along for the ride (implying they’ve been excluded from school) and one local boy Antoine (Matthieu Lucci) with a mysterious agenda of his own.

Alienated from his parents, spending time alone watching video games or hanging out with mates disaffected by La Ciotat’s transition from a thriving shipbuilding port to a marina for millionaires, Antoine is the first to produce a piece of writing – a graphic description of the murder of one of the yacht-owners. The team is shocked and its racial divisions burst into the open via incendiary references to the massacres at Nice (just along the coast) and the Bataclan nightclub in Paris.

Olivia, who is having problems with her next novel, thinks a solution may lie in exploring Antoine’s character and background in a one-on-one interview, and from here on the team’s thriller plot seems about to be bloodily enacted in real life. But Laurent Cantet is playing a deeper game, and the denouement is more akin to the social reality that he brought to the story of unemployment in TIME OUT than the more obvious attractions of a murder mystery – as one of the workshop members puts it, ‘I’m sick of DNA’.