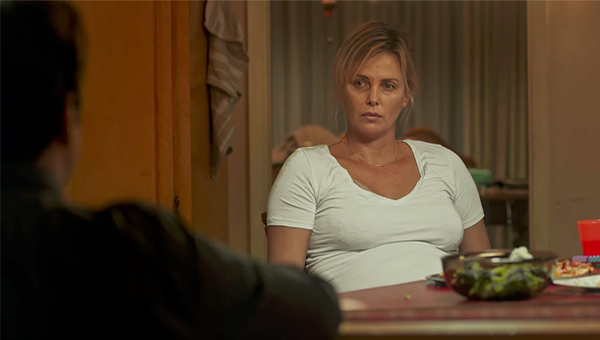 Just prior to the screening of TULLY there was a lengthy commercial for Max Factor showing a woman applying make-up to achieve perfection. It was thrown into immediate and ironic relief by the spectacle of TULLY’s Marlo – Charlize Theron, herself a former model – hugely bloated and sweaty as she awaits the arrival of her third child. The baby, named Mia (which Marlo has trouble remembering) only adds to her maternal crises, chief among them being her son Jonah (Asher Miles Fallica) who repeatedly kicks the driver’s seat as Marlo takes him to school, has a screaming fit when the usual car park is full, yet is described as ‘quirky’ by his mealy-mouthed teachers who are doing their best to get him sent elsewhere.

Marlo’s life at home, illustrated by a relentless montage of nappy-changing and breast-milk expressing is now even more chaotic, and not helped by her husband Drew (Ron Livingston) regularly retiring to bed, donning his headphones and playing video games – while downstairs, surrounded by broken toys and the detritus of microwaved pizzas, Marlo listlessly watches TV, mainly ‘Gigolos’, a hilariously gross reality show.

But then, miraculously, help arrives in the shape of the ‘night nanny’ Tully (Mackenzie Davis), paid for by Marlo’s wealthy brother Craig who has a perfect family, perfect lifestyle, and a dog called Prosecco. Tully is everything the slovenly Marlo is currently not: trim, organised, with an eager-beaver interest in the universe around her. She is full of what an overwhelmed Marlo calls ‘Fun Facts for Unpopular 4th graders’. While Marlo catches up on sleep for what seems like the first time in her life, Tully organises the house – in the morning when she’s gone the kitchen is spotless and there’s a tray of cupcakes on the counter.

It’s almost as though the ‘intelligent assistant’ Siri – which Craig’s household naturally possesses – has taken human form and helped give Marlo her life back… and along with that come audience misgivings that something isn’t right here, that events are about to take a sinister turn. Marlo has already surmised when the ‘night nanny’ idea was first mooted that she might find herself in one of those movies where the nanny turns out to be a homicidal maniac – she doesn’t, but a scene where Marlo and Tully connive to get Drew sexually aroused by Tully putting on a skimpy waitress’s outfit suggests that we might be spending more time inside Marlo’s head than we at first imagined. Her sleeping hours are already punctuated by dreams of mermaids rescuing Marlo from fathomless deep water.

Marlo’s final assertion of her new-found freedom comes when she and Tully leave the sleeping (and unaware) Drew in charge of the children as they drive into New York for late-night cocktails. The two women egg each other on and events take an increasingly drunken turn until finally the plot not so much twists as corkscrews into what seems like catastrophe: simultaneously jettisoning much of the carefully built-up realistic comedy that has gone before.

Of course the writer Diablo Cody is at liberty to take the story in whatever direction she likes, and it may be argued that its development is the logical outcome of Marlo’s almost pathological revulsion from the ageing process that she sees coming and graphically warns Tully about.

But this also comes at the expense of the characters, on which Charlize Theron and Mackenzie Davis have worked so expertly to make believable. This is the third collaboration between Cody and Jason Reitman (after JUNO and YOUNG ADULT, also starring Theron) and all are built on well-realised and obviously felt details, with sharp dialogue and memorably comic moments. TULLY is for most of the time a worthy third part of this women-in-modern-America trilogy, except for the denouement, which has a tricksy whiff of one of the (later, irritating) works of M. Night Shyamalan.