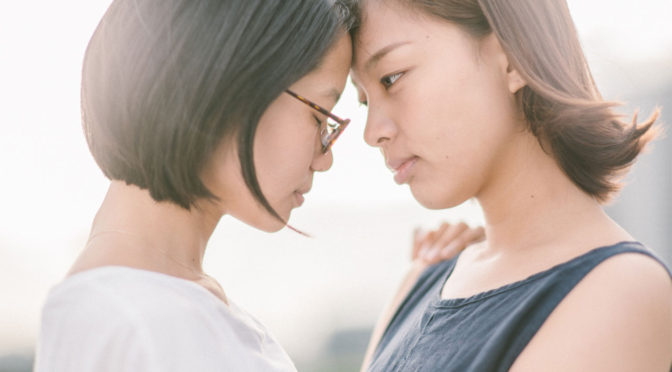 In UNTIL RAINBOW DAWN, deaf filmmaker Mika Imai takes on a new project portraying the tender relationship between two young women trying to find their place into society.

Japan is hardly a place that prizes inclusivity. It’s rather a place where complying with social norms is looked at with more than just a benevolent eye – it’s what you are expected to do to fit in. That’s why it simply comes out naturally to anyone to ask Hana (Eri Nagai) if she has a boyfriend right after asking for her age. When she stops by to visit her parents to enjoy a hearty sukiyaki we can feel it in our bones that, as soon as Hana’s mother casually mentions the notion of a boyfriend, such a convivial moment is doomed. “Disgusting. I won’t accept this” her mother declares upon the news of Hana being in a relationship with another woman, while her father tries to smooth things over by wondering if maybe she’s only mistaking her love for Ayumi (Haruka Kobayashi) for some kind of sisterly affection. You couldn’t be more naive, otousan.

Venturing out of the safe cocoon that heteronormativity makes you believe you should be totally comfortable in sure can be scary, but fear not if there is somebody ready to reach out and care for you. Eventually, that’s what’s going to happen in UNTIL RAINBOW DAWN – when your own family fails you, you can find your chosen one. Trying to help Hana out, Ayumi decides to take her to Tokyo to meet with other deaf people of the LGBTQ+ community. Here, the film gently strays from the main story to delve deep into the stories of Shou, a gay man who confessed to his senpai in high school only to be viciously outed the day after, and Yuta, a transexual man blessed with a supportive mother. It’s rather impressive how Imai manages to put together such a well-rounded story in such a short running time. Although the script lacks a general touch of sophistication, the final product is so pure and filled with good intentions it feels like you have just been embraced by an old friend whose minor faults you’re always willing to overlook.

Told through sign language but also including background sounds and music for the first time in Imai’s filmography, UNTIL RAINBOW DAWN is itself a hymn to inclusivity. Leaping from Hana’s and Ayumi’s flat to their workplaces and then to Tokyo, the film continuously basks in a glossy, white light until all doubts are finally lifted and holding hands comes as easy as walking away together at dawn.