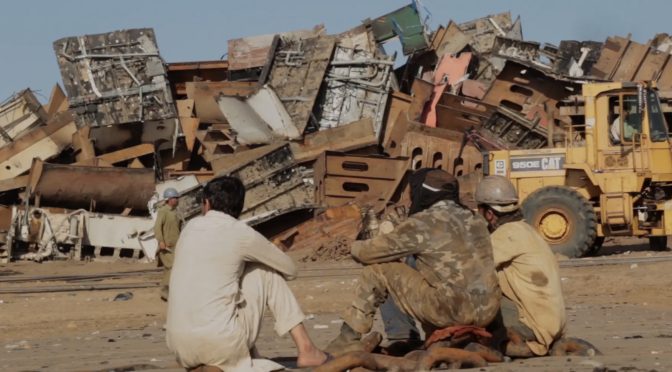 ALL THAT PERISHES AT THE EDGE OF LAND takes a semi-fantastical approach to the traditional documentary format, giving voice to a container vessel that is brought into the Gadani shipyards to be scrapped, and following a conversation that it holds with the labourers who work there. Though the plight of the workers and the ship’s ruminations on the inherent violence of its deconstruction highlight plenty of interesting themes, the brief 30-minute runtime allows for very little exploration of them, leaving the end result feeling rushed and unfocused.

“My story comes to an end here. And if not the end, then perhaps a form of defeat.” So says the Ocean Master – the anthropomorphised ship that floats at the centre of the narrative – to her destroyers, as they tear her apart, one chunk at a time. Sheherezade Alam provides the gentle and pensive voice of the ship, imbuing this otherwise unrelatable inanimate object with a sense of self, and an understanding of impending fate that can’t help but invoke sympathy.

Juxtaposed to this is the violent but oddly mesmerising deconstruction process: great pieces of the ship are pulled into the sea by giant chains, crashing into the surface and throwing up huge waves before sinking down to the depths, while teams of men go to work with blowtorches, systematically breaking down their colossal prey, like termites devouring a church. Primal though it may be, the visuals of the dismembering are truly stunning, and are easily the greatest strength of the film.

While director Hira Nabi finds an interesting and unique way to explore the story of the Ocean Master, so much is covered in such a short space of time, that the impact of each issue is lessened. The labourers speak about their dreams and desires, lamenting the corruption in Pakistani government, brutal labour laws and unsafe work conditions, but these moments are all too quickly passed over. This hurried pace makes for a frustrating experience, as the material that is included offers a fascinating peephole into an unfamiliar way of life, but just as it gets interesting, the peephole closes.

With its impressive visuals and inventive approach to documentary storytelling, there is certainly enough substance in ALL THAT PERISHES AT THE EDGE OF LAND to keep it floating, but more time really needed to be spent exploring the key themes in order to mark it truly seaworthy.