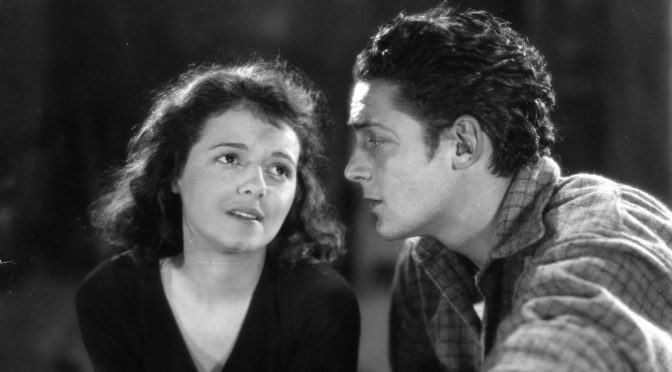 Frank Borzage’s 1927 silent classic 7TH HEAVEN begins in the gutters. But when viewing the restoration screened with spellbinding live piano accompaniment by composer Neil Brand, it is impossible to not be carried up with it from the grimy depths towards the stars.

Diane (Janet Gaynor) is a Parisian street urchin and Chico (Charles Farrell) is a sewer rat who dreams of being a street cleaner. Their lives are rough and dirty, and the pair’s first interaction is no storybook encounter — Chico saves Diane from a brutal assault at the hands of her sister, and he leaves her laying on the ground before finally taking pity on her. But when Chico and Diane pretend to be married to evade a police officer, they soon enough find themselves getting caught up in the fantasy of their own creation, clambering out of their despondent depths and transforming their lowly lives through love. Diane is a hopeless romantic despite the extreme abuses she has endured, and while Chico repeats again and again that he is an atheist and refuses to believe in any spiritual force beyond himself, he finds something he can believe in through loving her.

7TH HEAVEN set a high standard for cinematic romance, winning best actress for Gaynor and best director for Borzage at the first-ever Academy Awards. The film is undeniably melodramatic in mood, its emotion exaggerated and sentimental — yet it manages to draw the audience into that emotion and make them feel the full intoxicating force of romance. The characters seem almost self-conscious of hackneyed clichés, and find their own ways to express their feelings: Chico thinks that telling Diane he loves her is too “silly” to say out loud, so instead, he says simply “Chico – Diane – Heaven.” As much as Chico might deny it, he too is a romantic, prone to spouting poetry like that or “I work in the sewer but I live near the stars.” He and Diane climb a seemingly endless spiral staircase up to his apartment, and the effect of following them up and up is as dizzying and swoon-inducing as their whirlwind romance.

The romance is shattered suddenly by the outbreak of World War I, which rips Chico away from Diane and causes everything to descend into chaos. The war scenes, shot by Fox employee John Ford, are shocking in their fiery intensity, showing doomful images of the trenches and men marching towards their deaths. The film pushes the boundaries of what can be represented onscreen, taking the audience with it between highs and lows of human emotion, juxtaposing of dreamy lyricism with brutal realism. Through vertiginous shots from Chico’s balcony to the streets below or dissolves from Diane’s face to a ticking clock, the film weaves together a cinematic landscape that feels at once gauzy and ethereal as it does visceral and sincere.

The recurring religious references and the refrain of “looking up” show love as a source of hope, a spiritual force, a chance for transcendence. The pair remain tethered through a mystical connection, communicating every day when the clock strikes eleven. Chico’s miraculous return from the war reunites the couple and gives them a happy ending that seemed impossible, showing that love can conquer all and even defy apparent death. As we follow the romance of Diane and Chico that transgresses all ordinary bounds of time and space and maintains an optimistic look in the face of darkness, this film takes us as close as we can get to heaven.