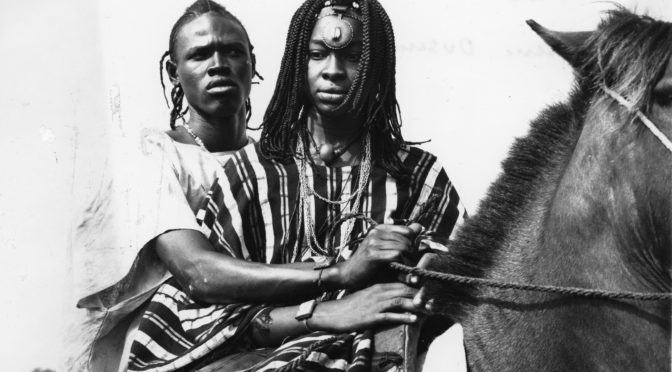 In the opening moments of CAMERA D’AFRIQUE, a man addresses the camera with a smile. He knows the audience is eager to see a film, an enthusiasm he shares. “Here in Africa,” he says with a smile, “we love the cinema.”

Through extensive voiceover narration and clips from landmark films, CAMERA D’AFRIQUE gives a historical account of the growth of independent African cinema. The 1983 Tunisian documentary, directed by Férid Boughedir, was recently screened in a restored version at the 2019 Cannes Film Festival, and showcases the innovative and tenacious spirit of African filmmakers who have fought to tell African stories onscreen despite limited financial resources and lack of support.

The opening interviewee, acting as a master of ceremonies, tells us that since the camera was a western invention, for many years Africa was photographed through the lens of western culture and reduced to a sketch of “third world.” The African camera and cinematic eye developed out of a necessity to combat stereotypes and an intense hunger for Africans to see themselves onscreen. Boughedir gives a concise introduction to film on the African continent through voiceovers, and chronicles the numerous challenges African filmmakers have faced throughout cinema’s history.

African independent cinema has always been deeply interested in rebellion: African films had the potential to threaten the European monopoly on African screens and challenge the dominance of European cultural influence. This meant that even when African films were made, they faced difficulties in distribution, and as a result many of them remain unknown by much of the African public or western distribution networks. CAMERA D’AFRIQUE gives history in somewhat broad strokes, focusing primarily on developments within the film industry rather than delving into wider cultural impacts of cinema. It includes some interviews with filmmakers to add further commentary on the harsh realities of financing, production, and distribution.

But perhaps the documentary’s greatest strength is the way that it opens up the archive of African cinema and lets many films that have rarely been screened outside their home countries speak for themselves. It presents clips of key African films like Ousmane’s Borom Sarret, considered to be one of the first films made by a black African, or Djibril Diop Mambéty’s Touki Bouki, which experimented in creating new modes of cinematic language. The documentary showcases the pioneering efforts of filmmakers like Senegalese director Sembène Ousmane and Nigerian director Oumarou Ganda, who learned cinematic techniques to project their own visions of Africa, and Senegalese director and ethnologist Safi Faye, who exposed rural conditions in her work and gave voices to local peanut farmers. Many of the films directly tackle topics of colonialism and subjugation, exposing the potential for revolution.

One significant idea to the documentary is that cinema allowed for the creation of a shared continental culture, even as people often identified primarily with their ethnic or linguistic groups. As modern states began seeking to define a pan-African culture, cinema helped form that African image for people to identify with. Cinema becomes a tool for fighting domination and alienation, allowing Africans to create and view their own images onscreen.

More than three decades after its initial release, CAMERA D’AFRIQUE is now something of a time capsule, capturing a critical era in the film industry. In the years since, African cinema has covered an immense variety of themes, even as it continually struggles with issues of financing and government support. It is an impossible endeavor to fully capture the cultural production of an entire continent, and Boughedir’s documentary is thus inevitably limited to showing only a fraction of the impact of African filmmaking. It nonetheless offers an insightful look into a piece of cinematic history that was for so long suppressed and does what African cinema has long been setting out to do—showing Africa through its own filmic eye and putting the camera in the hands of its people.