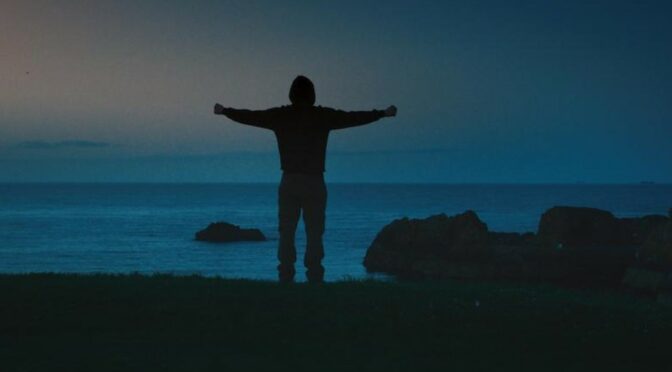 Marilyn Edmond’s CONNECT ruptures the format of truth cinema; with a penetrative lens that retains focus on a soulful sombre rather than a sensationalist scope; making it impossible not to wonder: why haven’t we seen a film like this before?

The film opens on a blurred landscape, where the camera fixes on a man standing on the edge of a cliff with his arms spread like wings, as he falls to his death. A young man called Brian finds himself on the same ledge, after reaching a breaking point with mental health and personal issues; before being saved by an altruistic stranger, Jeff, who takes on an introvertedly-motivated position to rehabilitate Brian. While recovering from his suicide attempt, Brian seeks a new beginning through a volunteer job at a day centre for the elderly, and a blossoming relationship between young, struggling mother Sam. It despairingly becomes clear that the break-away from complex ruminations is more of a war than a battle; with a victory that is dependant on the support of others.

Edmond’s minimalism manages to evoke a stark human connection to the characters within this familiar world, and its educationally driven dialogue rectifies the reality of severe mental illness and the epidemic of deadly silences. Where Edmond could have transitioned into a much more art-house portrait, she opts for naturalism and simplicity within the overall aesthetic. There is no real sensationalism in Edmond’s CONNECT; it’s not a film that glides through shock, graphic imagery and abstraction: transforming Edmond’s cinema from a screen to a window to protruding realities – or a mirror to our own innate struggles. Edmond’s thematic networks stream through an array of meditative interconnections that breathe uncomfortable but necessary life into the ever-expanding crevasses of the human mind. Although Edmond’s pensive realism flourishes throughout the cinematography and themes; the artificial qualities of the script – which at times develop into a television movie composition, operates in a slightly clunky fashion; distracting from the serious tone that regulates the film’s melody.

The performance of Kevin Guthrie is one of the focal merits of CONNECT, with a predominant sincerity to illuminate the constraints of illness, isolation and distorted identity. Guthrie’s portrayal of Brian, tenderly explores the fluctuations and instabilities of mental health struggles; with a genuinity that lifts the platform for suicidal awareness to a height that is difficult to ignore.

CONNECT is a refreshing addition to the cinema of truth, with surface intentions that are set to educate, humanise and battle the prognosis of debilitating mental disorders. While it loses its composure at times through unbalanced and trivial fundamentals: the film as a whole has the devices to challenge the stigmas associated with mental illness, and provide sufferers with an earnest sense of community.