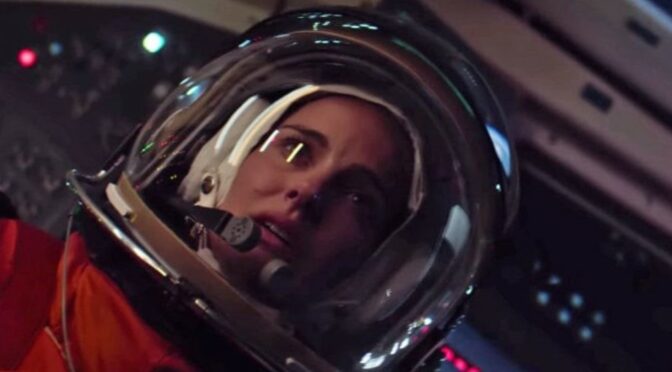 On its recent release in the US, LUCY IN THE SKY was received pretty badly by reviewers – not for being a poor piece of work (it isn’t), but for omitting an anecdotal detail in the story of NASA astronaut Lisa Kowak’s earthbound antics in 2007.

In Noah Hawley’s ‘Inspired by True Events’ retelling, astronaut Lisa Cola (Natalie Portman) does indeed drive 900 miles from Houston to San Diego airport (in reality Orlando) to possibly kidnap or certainly harm her rival for the affections of fellow-astronaut Mark Goodwin (Jon Hamm). The detail, denied by Kowak at the time, was that in order to speed up her mission of vengeance by not stopping en route, she wore ‘government-issue adult diapers’ aka nappies, and it’s the absence of these that has aroused fun-loving critics’ ire.

LUCY IN THE SKY has had a mauling for other reasons than just ‘Diapergate’ – for inventing supposedly redundant characters (Pearl Amanda Dickson as Lucy’s niece ‘Blue Iris’ who joins her on the San Diego journey); for wasting Zazie Beetz as Lucy’s rival Erin; and particularly for changing the ratio of the screen itself, which lurches into widescreen for scenes at a golf course and the bowling alley where Mark takes Lucy, in an effort literally to bring her down to earth after her life-changing experience walking in space during her mission aboard the shuttle.

Taking up most of LUCY IN THE SKY’s first half, the scenes of her extraterrestrial epiphany, the technical debriefs and training back at NASA, and Lucy’s gradual dissatisfaction with the banality of life at home in Texas with dull husband Drew (Dan Stevens) and her annoying Nana (Ellen Burstyn) – not to mention her terrible suburban wardrobe – are all well handled by Noah Hawley, using a talent developed in the TV version of FARGO for showing the screaming skull beneath placid small-town exteriors. Portman too makes a good fist of showing her military obedience and dedication being eroded by enveloping passion, disruptive emotions being anathema to the career of an astronaut.

At which point, with ‘Lucy in the Sky with Diamonds’ playing sonorously in the background, and Lucy suspended from the next mission, the movie itself goes off the rails and grows alien-like into an ugly and uncontrollable soap opera, a messy version of I, TONYA without the latter’s poignancy. Tearing down Dan’s lovingly-hung wallpaper and moving with Blue Iris into Nana’s house after she dies, Lucy arms herself with Nana’s revolver and assorted knives, ropes and aerosols (but no nappies) and heads – a familiar journey for Portman – into unhinged BLACK SWAN territory.

It must be said though that these later scenes are no less enjoyable than what comes before, and while hardly convincing overall as a coherent psychological narrative, LUCY IN THE SKY contains arresting many images and ideas, less in outer space than in its domestic settings, where Mark sits necking beers while watching over and over again footage of the fatal voyage of the space shuttle Challenger in 1986.