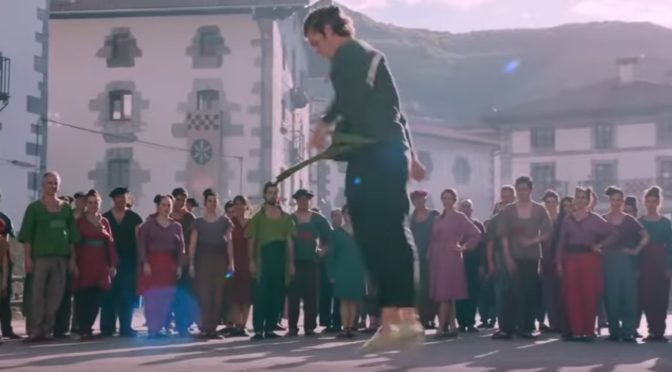 The Edinburgh strand of Cinemaattic’s Basque Spring Film Festival began in fine form with the screening of DANTZA (DANCE), which was preceded by traditional Basque dancing and pintxos. DANTZA is utterly captivating, despite not containing a word of dialogue.

Like an epic ballet, DANTZA tells the story of the Basque nation through the universal language of dance. Perhaps an understanding of Basque customs would aid the comprehension of the film’s themes, but ultimately DANTZA can be understood and enjoyed by anyone, no matter what their background is. It is an ecstasy of light, music and song, and cinematographer Javier Agirre Erauso deserves especial praise, as does director Telmo Esnal, who introduced the film via video.

The settings of the film are consistently spectacular, showcasing the astonishing geographic variety of the Basque Country, from the deserts of Navarre to the green hills of the north. DANTZA is about the Basque people and their traditions, but it is also a celebration of the Basque landscape. The changing of the seasons is a central theme and much of the film has the feel of a pagan carnival. These traditions, DANTZA reminds us, date back to the ancient beginnings of the Basque nation, a time before even Christ and the Romans. There are some contemporary resonances: the masks worn by a sinister group of dancers, who hold aloft threatening swords, could be a reference to the terrorist group ETA, for instance, the members of which often wore masks during broadcasts to conceal their identity. Mostly, however, DANTZA exists in a timeless void, both past and present.

Men work in rhythmic unity in a Mad Max-esque desert, whilst the coming of a storm is celebrated by a hermit in a cave. Fire and water clash in a stunning dance war (if only all wars were fought by dance). Apples are crushed to make sagardoa, the traditional Basque cider, which is drunk at a grand feast in a town. This fun celebration is a riot of colours, but it is at this point that DANTZA becomes a bit less enigmatic, and thus less interesting. The heterosexual romances played out in the concluding dances are obvious and unengaging, and some of the dances are overlong. A shorter running time might have made for a more consistently engaging film, although Juan Antonio Urbeltz’s choreography is so excellent and seamless, director Esnal was probably reluctant to cut much of it out.

The costumes designed by Arantxa Ezquerro are stunning, for instance the yellow and pink flower costumes of one scene, whilst the dresses and headgear of one group of women are reminiscent of the costumes worn by the characters in Margaret Atwood’s The Handmaid’s Tale.

This masterful film is especially relevant in Scotland, another semi-autonomous nation with its own ancient traditions of song and dance. Just like ‘Auld Lang Syne’ encapsulates Scotland for many people around the world, there is surely no better introduction to Basque culture and customs than the joyous DANTZA.

You can find out more about the remaining events in the Basque Spring Film Festival here.