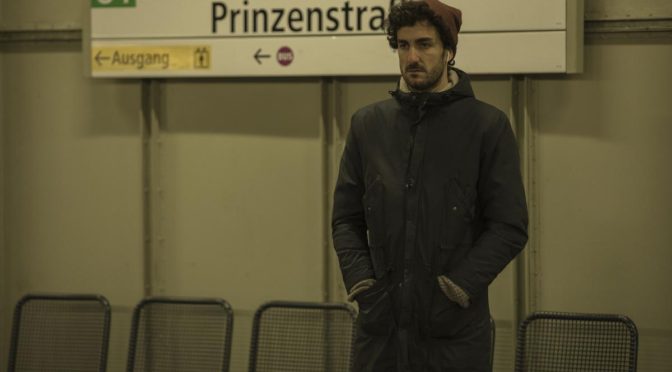 College reunions that go wrong as old friends try to recapture the past – it’s a tried and tested movie formula, from John Sayles’s RETURN OF THE SECAUCUS SEVEN, to Lawrence Kasdan’s THE BIG CHILL and Kenneth Branagh’s PETER’S FRIENDS.

In DISTANCES, Alex’s friends travel from Barcelona where they hung out together, to Berlin where Alex (Miki Esparbe) now works as a designer. It’s the heavily pregnant Olivia’s (Alexandra Jimenez) idea to celebrate Alex’s birthday weekend by arriving unannounced at his front door, a surprise already treated with misgivings by the other friends: Eloi (Bruno Sevilla) and Guille (Isak Ferriz) accompanied by his new partner Anna (Maria Ribera).

Alex himself is less than happy by the surprise, scrambling to tidy his roomy but dingy apartment as the others wait by the entryphone, and hiding a large box which has Significance written all over it, besides a name revealed in due course. Once reunited, the friends’ relationships immediately start showing the cracks: Olivia’s surly partner back in Barcelona resents her visit; Anna has been fired from her architect’s job in Hamburg and loathes Germany; comfortably-off Guille can’t resist needling his friends over their shortcomings, especially Eloi who is back with his parents after losing his flat, spending most of his time on Tinder.

All this is revealed in DISTANCES’ first third by which time the audience may want to join Alex, disappearing overnight as the others bicker and try to track him down via their mobiles. Olivia tries to salvage the weekend by spending the Saturday making a cake, alone in the apartment until Marion (Saskia Rosendahl) arrives: her name is on the mystery box and it’s clear Alex is avoiding her too. The scene between the two women is at the heart of the film, touching and funny and explaining much of the background to this misbegotten adventure.

Co-writer and director Elena Trappe conjures impeccable performances from her cast and DISTANCES is full of telling moments, from Eloi being unable to pay a supermarket bill to Olivia trying on Marion’s top. Julian Elizalde’s hand-held camera prowls effectively round Alex’s apartment and the streets of Berlin, making it simultaneously vibrant and alienating.