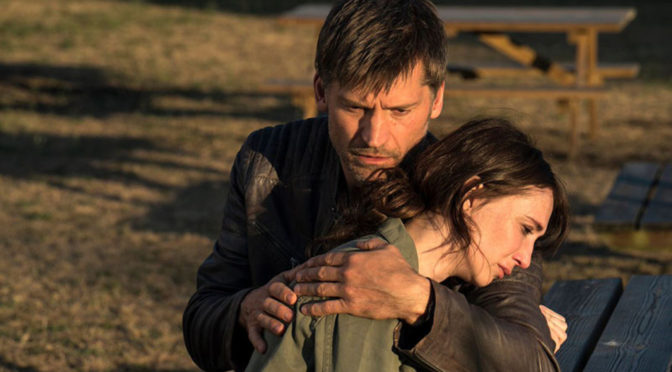 Relegated to a VOD release, final cut snatched from its director, bearing the marks of a rushed and underfunded shooting-schedule, and visually incomplete to boot, Brian De Palma’s DOMINO has all the warning signs of a real cinematic disaster. And yet, the experience of watching the film is, at times, at odds with these facts.

For all its occasional jankiness, DOMINO begins brilliantly. Set in Copenhagen, in 2020, nondescript cop Christian (Nikolaj Coster-Waldau) and his partner Lars (Soren Malling) are called to an apparent case of domestic violence. This scene is preceded by an extended shot, in Christian’s apartment, which provides a crucial detail: he has left his gun behind. As they enter the lift, they bump into Ezra (Eriq Ebouaney), whose feet are wet with blood. He stabs Lars in the neck, and a VERTIGO-quoting rooftop chase is initiated, ending with Ezra captured by CIA (led by an enjoyably hammy Guy Pearce), and Christian dealing with the aftermath of his friend’s attack.

Ezra, who is an ISIS-affiliated terrorist, becomes a brutal enforcer for the CIA in Denmark, depicted as an EU police-state under the Americans’ watchful aegis. Christian, meanwhile, is reprimanded for forgetting his gun and begins investigating the terrorist network (operating as fast-food sellers, hiding explosives in tomato crates) with Alex (Carice van Houten), whose motivations are more tangled than they first appear.

Much of this – the ‘drama’ – is plainly bad; many scenes are staged with a perfunctory, even bored, eye-rolling manner, others are barely colour-corrected; the high-strung score is ramped up to alert you of some impending action, only emphasising how dull what’s happening presently is; and the performances are hilariously, stoically wooden. Coster-Waldau particularly seems to have been inspired by Ben Affleck’s turn in Terrence Malick’s TO THE WONDER: he’s a living slab, essentially part of the scenery — he can run, he can fight, he can look vaguely in the direction of another actor in a scene, but can he emote? Are you joking? No chance.

“…should you be able to suffer through this, there are shots, sequences, scenes which demonstrate that unmistakable and inimitable De Palma touch.”

But, should you be able to suffer through this, there are shots, sequences, scenes which demonstrate that unmistakable and inimitable De Palma touch. This is another way of saying that the director’s ‘provocative’ — a dread term — leanings are in evidence here, and they are as nasty, irresponsible, precisely articulated, and expressive as ever.

De Palma strikes at where we live – he sets fire to shit-filled bags and leaves them at our complacent doors. DOMINO is another instalment in the director’s filmography concerned with our relationship with images and screens, how people can be lured into a false sense of security, or panic, by the manipulation of media. The key sequence here is one which depicts, in split-screen, first-person-shooter fashion, a terrorist attack on a film festival red carpet. The nauseating effect of the POV is doubled when it occurs to you that this might be, in a compartmentalised way, wish-fulfilment on the director’s behalf. The sequence calls to mind the unbelievable “Be Black, Baby!” sequence from De Palma’s HI, MOM! for its sheer in-your-face outlandishness.

The finale, set in an Almeria bull-fighting stadium, becomes a mission to stop both an atrocity on Spanish soil and the recording, for propagandistic purposes, of that atrocity. It’s an incoherent set-piece, for sure, but it’s assembled so beautifully with such attention to tension, recalling the structures of the delirious, musical sequence-making of DRESSED TO KILL, BODY DOUBLE, and FEMME FATALE.

Only those compelled by a sense of auteurist completionism will end up letting DOMINO into their eyes and ears, which is, in a limited way, a shame: because, despite the obvious truncated and distorted nature of the film, the marks of De Palma’s authorship are still visible, and still pleasurable. It’s all here: the ominous zooms, the axial cutting, the split-diopter shots, the mystifying chutzpah; and, to save the best until last, it’s good to note that when De Palma the sequence-constructor is allowed to emerge from the movie’s cracked casing, he can still sing.