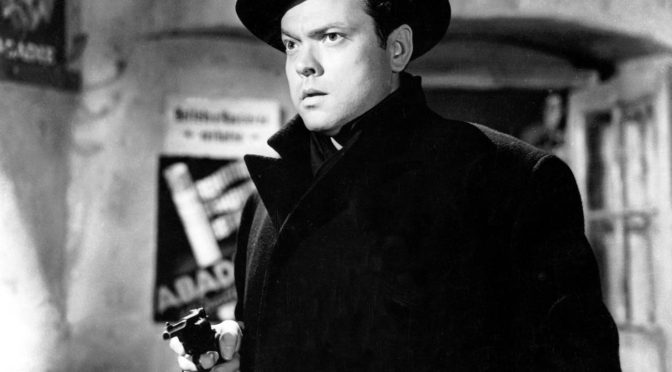 Carol Reed’s 1949 noir mystery film THE THIRD MAN explores the dark heart that exists at the centre of everybody, examining through the slippery Harry Lime (played in scene-stealing fashion by Orson Welles) how far we’re each willing to go in times of extreme necessity. Following author Holly Martins’ search for Lime in post-war Vienna, we recognise a deeply uncomfortable truth; none of us are immune to the temptations of criminality in order to survive. Having re-watched the film recently, I realised that we end up liking Lime not just for his verbose monologues and wit, but because each of us would probably consider partaking in that lifestyle if we knew we could get away with it.

We open on a Vienna divided between British, French, American and Soviet forces, and there’s no rest for the wicked: black market trading is rampant, common people bartering illegally to make ends meet. The opening narration, performed by director Reed, shows the degradation that’s befallen the city and her people. “I really got to know [Vienna] in the classic period of the Black Market. We’d run anything if people wanted it enough – mmm – had the money to pay. Of course, a situation like that does tempt amateurs but you know they can’t stay the course like a professional.” Imagery of illegal trading as a corpse floats down the Danube paint a desolate picture far more than words alone. Lime, meanwhile, thrives upon the situation of opportunity, seeing the loss of morality not as a burden but rather an advantage that can give him an edge in Vienna’s illicit market. “Tell me. Would you really feel any pity if one of those dots stopped moving forever? If I offered you twenty thousand pounds for every dot that stopped, would you really, old man, tell me to keep my money, or would you calculate how many dots you could afford to spare?” Wrapped up in his jubilation, he briefly forgets his existence as a fugitive of the law. Lime, quite literally on top of the world in the Wiener Riesenrad Ferris Wheel, can’t seem to recall basic physics; that what goes up must come down.

“Lime, quite literally on top of the world in the Wiener Riesenrad Ferris Wheel, can’t seem to recall basic physics; that what goes up must come down.”

What makes Welles’ portrayal of Lime so human is the distinctly multi-faceted approach to it. Himself a veteran of all of Shakespeare’s great tragic heroes, Welles doesn’t waste time and instead intentionally peppers his performance with double-meanings. He’ll smile whilst discussing murder, and go suddenly stony when his girlfriend is brought up. Welles uses what little screen-time he gets to create a whole life and backstory, whilst never enduring blunt and forced exposition. The mixture of deeper meanings and so-practised-it’s-natural delivery turn Harry Lime from another noir schemer into a prime example of the villain we love to hate.

The dark pragmatism of Lime’s soul is shown in another speech he makes to Holly when discussing how creativity results from conflict. “In Italy, for thirty years under the Borgias, they had warfare, terror, murder and bloodshed, but they produced Michelangelo, Leonardo da Vinci and the Renaissance. In Switzerland, they had brotherly love, they had five hundred years of democracy and peace – and what did that produce? The cuckoo clock.” Making light of the subject reflects how both criminals and artists flourished in the aftermath of World War Two, taking pride in the work that came about due to the suffering of millions. Lime’s cheerful disposition has an infectious streak, a charming smiling rogue who might buy you dinner before killing you. This joviality makes us wonder whether he really is as terrible as police Major Calloway says, and before we know it, we’ve begun sympathising with a liar and murderer who looks on others only as a means of financial gain.

“The mixture of deeper meanings and so-practised-it’s-natural delivery turn Harry Lime from another noir schemer into a prime example of the villain we love to hate.”

For every act of evil Lime carries out, there is a degree of self-love attached to it. An argument could be made that Lime’s behaviour, both what we see directly and what is only suggested, were only ever acts of self-preservation. Lime began selling heavily-diluted penicillin, knowing full-well that it would not prevent meningitis setting in, but only so he could secure passage for himself and Anna out of anarchic quartered Vienna. When his plans fall through and he has to go into hiding his self-preservation efforts continue, albeit without keeping Anna in consideration. Even his final choice of letting Holly kill him and thus end the chase, can be seen as self-love, for Lime has managed to escape the proper course of justice by giving himself up for a quick death from his friend. Whilst it’d be premature to suggest Lime doesn’t remain the villain by the end, with hindsight we can easily sympathise with a man forced to accept his own execution.

Harry Lime is the embodiment of how characters can be constructed with a great deal of depth and richness in ideas whilst also having very little screen time, a trait that has influenced screen villains as notable as Darth Vader, Hannibal Lecter and Joker of THE DARK KNIGHT. Within THE THIRD MAN, every character holds the potential to do evil should they wish, and as such risk losing their morality as well as their lives through the choices they make. Perhaps we should consider whether a man such as Lime can ever consider having lost any part of himself, or if he has so much self-love that he has slipped away into pure egomania and psychopathy. That is the genius and depth of the character written by Graham Greene and performed by Orson Welles; someone the viewer can attempt to dehumanise and hate, whilst their unique characteristics and distinctly human faults remain firmly in sight.

3 thoughts on “How Harry Lime Made Being Bad Good”