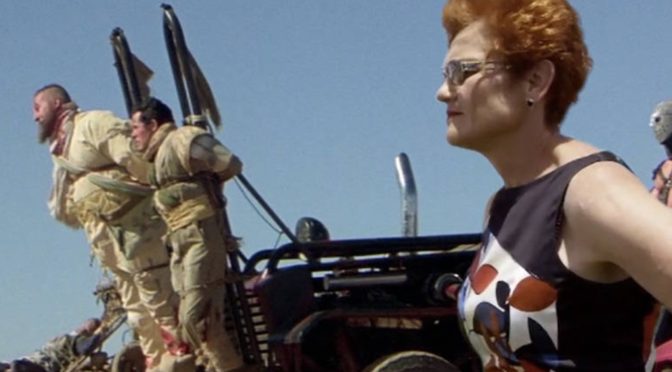 The Glasgow Short Film Festival (GSFF), baby brother of the Glasgow Film Festival, is back for its twelfth year and the opening night of the GSFF proved that it can also attract a large crowd. The venue had to be changed to the larger Cinema 1 at Glasgow Film Theatre, where we were first treated to the short film ENOUGH, by Swedish animator Anna Mantzaris. Humorously depicting moments of rage or frustration in everyday situations, it provided a nice introduction to the full-throttled fury of the main film of the evening, TERROR NULLIUS.

The brainchild of Soda_Jerk (Dan and Dominique Angeloro), a sibling art duo from Sydney that has been challenging the boundaries of film since 2002, TERROR NULLIUS is radically experimental and unabashedly political. With its medium-length running time, TERROR NULLIUS stretches the definition of a ‘short’ film, but nor can it simply be categorised as a feature film. Soda_Jerk sampled, re-edited and superimposed footage from dozens – possibly hundreds – of mostly Australian films and stitched them together to create a sort of Frankenstein’s Monster: a bewildering mishmash that is part tribute to Australian cinema, part excoriating take-down of contemporary Australia (the title is a pun on ‘terra nullius’, the myth that Australia was nobody’s land before Europeans colonised it).

Time and place blur as one film feeds into another, creating fascinating new connections in the process. In a post-film Q&A, Soda_Jerk made clear that no original footage was used in the film: everything, from the audio to the visuals, was sampled (or, depending on your standpoint, nicked) from other filmmakers. As for the legality of this, Soda_Jerk shrugged, stating: “We’re pirates at heart.” From Skippy the Bush Kangaroo to Steve Irwin, almost all of the classics of Australian TV and film show up at some point.

“…often hilariously bizarre: […] when the flesh-eating sheep arrive, you’re not even that surprised.”

TERROR NULLIUS is often hilariously bizarre: by the point, later in the film, when the flesh-eating sheep arrive, you’re not even that surprised. This is no hallucinogenic acid trip, however; it has a clear ideology, with themes such as the Australian refugee crisis and LGBT+ rights playing a prominent role in the film. Women take revenge on misogynistic men; were-kangaroos take revenge on macho hunters; a young boy takes revenge (on behalf of most of Australia) on former prime minister Tony Abbott. There is a lot of revenge, a lot of anger, but also a lot of humour. Indeed, this is partly Soda_Jerk’s secret weapon: through satire they can push the boundaries of film (and copyright law) in ways that they otherwise might not be able to get away with. Soda_Jerk’s editing is skilful, and it becomes hard at times to pick apart which film is from where. There is no narrative, and yet you are carried along by the flow of inexplicable events. It arguably makes more sense to think of TERROR NULLIUS as an anthology of short films than a single film in itself.

It is, in Soda_Jerk’s own words, a “weird misbehaving film”. For some, it might be too weird. Indeed, one of the film’s commissioners and funders, the Ian Potter Foundation, dissociated itself from the film after seeing it. At a time when deepfakes threaten to distort our trust in the visual image, TERROR NULLIUS draws attention to the artificiality of film. Rather than trying to represent real life, it uses art to explore themes from the real world in fictional contexts.

Soda_Jerk also have an installation entitled ‘Astro Black’ at the CCA Intermedia Gallery from the 14th till the 17th March, each day from 11:00 to 19:00.