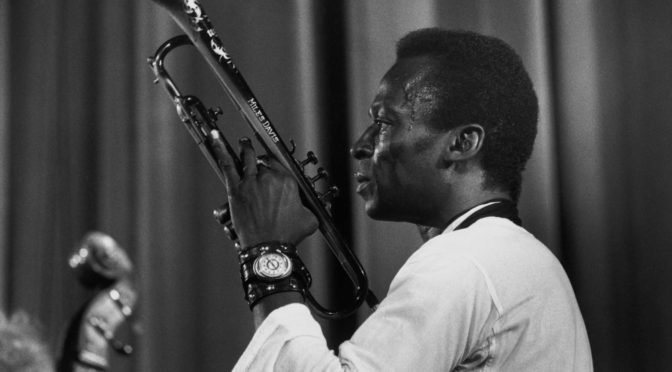 MILES DAVIS: BIRTH OF THE COOL screened at the Cambridge Film Festival on 23 October. Director Stanley Nelson spoke to Yozzie Osman about the making of the film.

Yozzie Osman: How did this project come about, and what inspired you to cover the legendary jazz figure that is Miles Davis?

Stanley Nelson: I’ve always been a huge jazz fan, and a huge Miles Davis fan. My parents both were jazz fans and my father had the KIND OF BLUE album, which I borrowed and put into my bag as I went off to college. I’ve been listening to Miles ever since. I feel really fortunate that this project came together and was financed by our company in London, Eagle Rock Entertainment, and American Masters in the United States.

YO: I noticed when watching this film that it feels very modern, despite dealing with the five decades that cover Miles Davis’ life and music. How did you manage to blend the past with the present?

SN: We knew that this film was for audiences today, and we wanted to meet the audience where they are. We knew that a lot of people going to see the film would know Miles’ music, but we also knew that a lot of people wouldn’t know his music at all – they might know his name but not necessarily his music. We had to balance trying to appeal to both sets of audiences and everyone in between. We also wanted to use everything that we had in our arsenal: graphics, music, sound, anything to make this film look modern and do different things with the material.

YO: Was it difficult to get the archive footage and sound materials that you compiled making this documentary?

SN: It took around three years to make the film. We spent every moment of that looking for more and more archival footage, going all over the world to find material. We found great behind-the-scenes footage and photos. A friend of Miles, Corky McCoy, had shot 16mm home movies that we used throughout the film. There are some great shots of Miles shadowboxing in the ring as he was a great boxing fan, and of Miles on the beach and in his Ferrari. All of these we found through 16mm footage that had never been seen before.

YO: The film features lines from his autobiography delivered by a voice actor. How did you want this to work as a narrative tool?

SN: We thought there was a way to make this film without narration and without a voice talking a lot in the background. We wanted Miles to narrate his own story. We arranged for a great actor, Carl Lumbly, to read some extracts from Miles’ autobiography, though the word ‘reading’ probably does a disservice as we feel that he really embodies Miles. I think this adds a different element to the film as we hear Miles talking about his own musical decisions, and this is juxtaposed with the people who played with him, such as Herbie Hancock, Wayne Shorter, Ron Carter, and others who knew him well.

“We really wanted this film to show the whole of Miles’ life – warts and all.”

YO: Did you have much involvement from Miles Davis’ family with the making of the documentary?

SN: Miles Davis’ family signed off on the film and were very cooperative, although they didn’t see any of the footage of the film until it was over. They didn’t control any of our decisions but they helped us make the film and were great in giving us access to people who knew Miles and who played with him. Having the family’s backing allowed us to gain access to people that might have been more difficult to reach, such as Quincy Jones or Carlos Santana.

YO: Thinking about the content of the film, I noticed that you didn’t shy away from looking at the darker side of Miles Davis’ life. How did you find having to balance the musical genius of Davis with the more troublesome side of his life?

SN: We really wanted this film to show the whole of Miles’ life – warts and all. He did have problems in his relationships with abuse, and he did have problems with drugs. We knew that these issues had to be part of the film, the balance was that we didn’t want these issues to overwhelm the film. The film was made because of Miles’ music, and to some extent, these issues shaped his music. If Miles was just an abuser or a drug addict we wouldn’t be making this film.

YO: As a fan of Miles Davis, did you learn anything new about him while making this film?

SN: I think the one thing that happens – and I hope it happens for viewers when they see the film – is that Miles’ life starts to make sense and there are some aspects of his life that start to fall into place. His father and his mother had a very abusive relationship and we see that reflected in Miles’ relationships. Miles goes to France in 1949 and is celebrated in Europe, and when he goes back to the States he spirals into depression and drug addiction.

There are various connections throughout Miles’ life. He goes back to France in 1956 and does the score to ELEVATOR TO THE GALLOWS by improvising little sketches, then he goes back to the United States and does KIND OF BLUE in a similar way. There’s this thread through Miles’ life that makes sense, and what happens in the film is that the thread is carried through and things start to connect for the audience.